An overworld is basically a large world that grants access to other subworlds. An overworld is different from a level select, menu or map in that the subworlds are accessed by using the same methods used in gameplay (such as running around, jumping, fighting, etc.). Overworlds are usually outside, and have the same music throughout most of the game, which almost always becomes (or is derived from) the game's theme song. The overworld music ultimately sets the mood for a game.

Some video games like The Legend of Zelda: Ocarina of Time or Super Mario 64 have one central overworld (Hyrule Field, Peach's Castle, etc) that branches into different parts of the underworld, usually called 'dungeons', 'temples', 'stages', 'courses' or 'levels'. These types of overworlds tend to defy the laws of physics, as a little door in the side of a tree might lead into a dungeon that would seem (from the inside) to be a four story tower. As a rule, houses are allowed to be at least one-sixteenth as big in the overworld as they are inside. 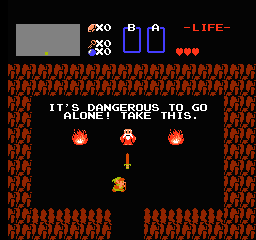 Underworlds are dark and spooky.

Other games, such as Luigi's Mansion or Grand Theft Auto: Vice City consist of one big overworld. The overworld isn't a means of accessing 'dungeons', but rather, the overworld has scripted events in certain areas at certain times, that create gameplay right in the overworld itself.

In most games with overworlds, the overworld will gradually expand as the game progresses, granting access to new areas. This often leads to the very tedious task of walking from one end of the overworld to the other. Many games employ methods of transportation to allow the character to more quickly move across the overworld, thus making its increased size more manageable. Some examples of this are Link's Epona, warp points, or airships.