From Codex Gamicus
(Redirected from PS3)
Jump to: navigation, search

The PlayStation 3 (abbreviated as PS3) is a video game console developed by Sony as a successor to the PlayStation 2. It was released first in Japan on November 11, 2006; November 17, 2006 in North America; and March 23, 2007 in Europe and Australia. It competes against the Xbox 360 and Wii as part of the seventh generation of video game hardware.

It was discontinued in North America in October 2016 and in Japan in May 2017. 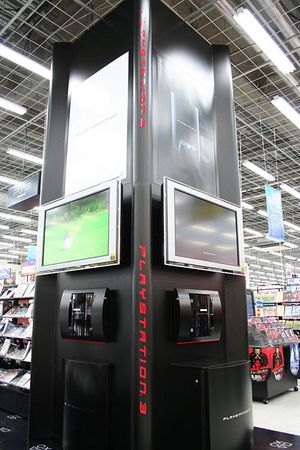 The PlayStation 3 was officially unveiled at E3 2005 on May 16, along with the Sixaxis Controller, which would remain the official controller until 2008, when it was replaced by the DualShock 3 Controller.

It was first released in Japan on November 11, 2006 at 07:00. According to Media Crate, 81,639 PS3 systems were sold within 24 hours of its release. It would later be released in North America on November 17. Reports of violence surrounded the release of the PS3, with campers being robbed at gunpoint and a drive-by shooting with BB guns being a few examples of the violence over the systems.

The PlayStation 3 features a Blu-ray Disc drive for games, Blu-ray movies, DVDs, CDs, and other optical media. Originally, the PS3 was made available with hard drives of 20 and 60 GB; but various sizes up to 500 GB have been made available over the years. All PS3 models can have their hard drives upgraded.

The console uses the Cell microprocessor, designed by Sony, Toshiba, and IBM, as its CPU. The system has Bluetooth 2.0, Gigabit Ethernet, USB 2.0, and HDMI 1.4 built in. Wi-Fi networking is also built-in on all but the 20 GB models. 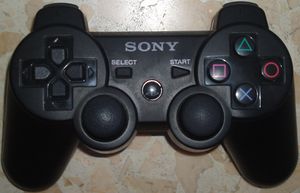 At E3 2005, the Dual Shock 3 controller with a crescent-shaped design was shown for the PlayStation 3. However, the model was changed to one similar to the Dual Shock 2 controller of the PS2 because of negative response from gamers. Sony later introduced the Sixaxis controller which exhibits six degrees of freedom. The controller is also as lightweight as the Dual Shock 2, making the Xbox 360 controller look like a paperweight. The controls are the same as the old Dual Shock controller but the vibrating features have been removed and replaced with a motion sensor. The controller also uses wireless Bluetooth technology and can be wired and charged with an USB cable.

Exclusive games to PlayStation 3 include: