Pac-Land is an arcade game released in 1984. It was developed by Namco and released in America by Bally/Midway. It stars Namco's mascot Pac-Man on his adventure through Pac-Land. It was the first Namco arcade game to use the then-new arcade system later titled as Namco Pac-Land. It was also one of the earlier side-scrolling platform games in video game history, preceding the better-known Super Mario Bros. by Nintendo. Pac-Land features parallax scrolling for some of the background elements, a feature that would not become commonplace until the 16-bit console era began much later.

In the American release of Pac-Land by Bally Midway, the characters' appearances are based on the designs from the Pac-Man animated series produced by Hanna-Barbera, to promote the animated series, as well as the video game series. In the Japanese release by Namco, the Pac-Man sprite is closer in appearance to Namco's official artwork of the character with a longer nose, Pac-Man shaped eyes, and (for this game) a feathercap. In addition, both versions feature the main BGM and "jingles" from the aforementioned series; however, the rights to the main BGM in the game belong to Hanna-Barbera, not Namco. 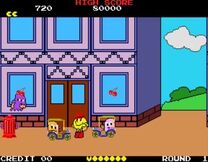 Pac-Man surrounded by the Ghost Gang.

Pac-Land itself is split into trips. In each of these trips the objective is to get the fairy (that is kept under Pac-man's hat) to Fairyland and also to return home to Pac-Man's house. The majority of the trip involves moving from left to right avoiding various obstacles such as the enemy ghosts, water spurts and quicksand traps. Each trip is divided into a number of rounds, the end of which provides Pac-man with bonus points depending on how much time he has left and also his position in jumping at the end of each round. The penultimate round of a trip ends with Pac-Man entering Fairyland and returning the fairy under his hat to the Fairy Queen. In return the Fairy Queen gives Pac-man magic boots. For the final round of the trip, Pac-Man has to travel from right to left back home. For assistance he uses the magic boots, which allow him to jump repeatedly while in mid-air. Once Pac-Man completes the trip, he is greeted by Ms. Pac-Man and Baby Pac-Man. In the US release of the game, Pac-Man's cat and dog in the cartoon series, Sourpuss and Chomp-Chomp, are also there to welcome Pac-Man home. Pac-Man then begins his next trip following the same objectives as before, although the difficulty increases.

Pac-Land was released to several home consoles and computers, including the Commodore 64, the Commodore Amiga, the Atari Lynx, the Atari ST, the TurboGrafx-16, the ZX Spectrum, the Amstrad CPC, the MSX and the Famicom (Japan-only). Pac-Land remained a fixture in many video arcades through the mid-1990s, and was republished in 1996 as part of Namco Museum Volume 4 for the PlayStation. A board game and a handheld LCD game of Pac-Land were also produced.

A hidden item (sometimes accidentally dropped by the ghosts) is a Flagship from Galaxian, which rewards 7650 points when collected (a reference to Namco's goroawase number of 765). The Galaxian Flagship is a long running cameo that appears in the Namco-made Pac-Man games.