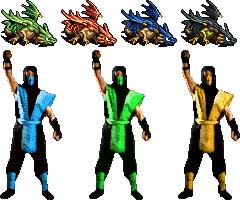 A palette swap is a design technique often used in 2D games, in which multiple characters are made from one model by swapping it's color pallete. Palette swapping was a common practice back when sprites were the norm, primarily in RPGs. It has since become increasingly rare in the 3D generation, but not completely extinct.

In fighting games, such as Mortal Kombat or Street Fighter, palette swapping lets them increase their roster of fighters without having to draw new ones. One of the most famous examples of palette swapping is Mortal Kombat's Scorpion and Reptile, who are simple swaps of Sub-Zero. Though the color's are swapped, it's still left up to the programmers to make the fighters different, with new moves & character controls.

With the move from 2D to 3D graphics in gaming, the concept of palette swapping has greatly diminished almost to the point of extinction. However some forms of palette swapping do still exist in 3D games, one example is in certain fighting games where players are capable of playing as the same character, one version of the character may be a different color as to avoid confusion when playing, such as the case in Super Smash Bros. Melee. Another way the palette swap lives on is with the act of texture swapping, which is similar in palette swapping in that it's when a single 3D model is taken, and made into two characters by either making two unique textures, or simply modifying the texture on the model previously, this was a notable technique in the game BioShock.