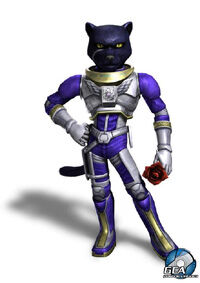 Panther Caroso is a character in the Star Fox series. As of Star Fox Assault, he is a new member of Star Wolf. He was recruited by Leon Powalski and Wolf O'Donnell to replace Pigma and Andrew Oikonny.

Panther's signature symbol is a single red rose. He has painted one on his Wolfen fightercraft to differentiate it from the others. He is apparently a ladies man, as he often hits on Krystal over transmissions.