The name Paras is a malformation of the word Parasect, its evolved form, a portmanteau of the words, parasite, and insect. The name Paras refers to both the species as a whole, as well as individual species in the games, anime and manga. Its name in the beta versions of Red and Blue was Parasyte.

Paras resemble a small, orange, tick, with large, colourful fungi, growing from its back. Paras' legs resemble those of insects, and have pincers that are similar to those of a lobster. In the Pokémon universe, Paras would be born with tiny spores covering their body, which grow as the Pokémon feeds, called tochukaso mushrooms. It is noted in the Pokédex, that the relationship between the host and the mushrooms is a symbiotic relationship: the mushrooms would sap energy from the host, causing the Paras to continuously burrow underground in forest areas to gnaw on tree roots, since the tochukaso would draw most of the energy from the roots. In return, the mushrooms can defend the host by spraying toxic spores at enemies. The mushrooms themselves would have strong healing properties, and would be valued for their life extending properties

Paras can be found in Mount Moon and the Safari Zone, in the Pokémon Red and Blue, Pokémon Yellow, Pokémon FireRed and LeafGreen, versions of the series. They can be found in the Ilex Forest, Mount Moon, and in the bug-catching contests in the Pokémon Gold, Silver and Pokémon Crystal, of the series. In Pokémon XD: Gale of Darkness, a Paras can be snagged, captured from a trainer,[1] from Humah, a Peon grade member of the evil organization, Cipher.[2]

Paras can evolve into the Stage-1 Pokémon, Parasect at level 24, and can learn one of two abilities, Effect Spore, which has a thirty percent chance of affecting a Pokémon with a condition when Paras is hit with a physical blow, or Dry Skin, which causes a Paras to lose health when the sun is shining brightly, brought into play by the move, Sunny Day, but can regain health when the battle field is covered in rain, brought into play by the move, Rain Dance.[3] In FireRed and LeafGreen, Paras, along with Parasect, often hold an item called the Tiny Mushroom, and to a lesser extent, the Big Mushroom. After attaining a certain amount of one of these items, the services of a Move Relearner, on Island Two, become available, allowing Pokémon to remember moves, previously forgotten.[4]

The Pokémon anime series and films are a meta-series of adventures separate from the canon that most of the Pokémon video games follow (with the exception of Pokémon Yellow, a game based on the anime storyline). The anime follows the quest of the main character, Ash Ketchum[5]—an in-training Pokémon Master—as he, May and Dawn (as well as several other companions[5]) travel around the fictitious world of Pokémon along with their Pokémon partners, Pikachu, Blaziken,[6] and Piplup.[7]

The first major appearance of a Paras was in Episode 44, "The Problem with Paras", in which a trainer called Cassandra wanted her Paras to evolve to Parasect to make a healing potion from its mushrooms, however, Paras lacked experience in battle, making winning battles very hard. Ash offered for his Charmeleon to battle Paras, so it could gain experience and evolve into a Parasect. Ash commanded Charmeleon to let Paras win the battle, but Charmeleon used its powerful flame abilities to knock out Paras, before flaming Ash himself. Later, Paras plucked up the courage to battle the disobedient Charmeleon, and evolved into a Parasect, allowing Cassandra to use its exotic mushrooms to make healing medicine for Pokémon.[8]

A Paras was owned by a minor character in Chapter 46, "VS. Marowak", of the Pokémon Adventures manga, a series based on the original games, by William, a former student of university lecturer and gym leader, Erika. As Yellow entered Celadon City, Erika informs her that Red has appeared on the other side of the city, causing Red's Pikachu, Pika, (in the control of Yellow in his absence), to run off from the trainers.[9]

Erika and Yellow followed, but discovered Red was secretly William in disguise, who had plotted to kidnap Pika. Erika rushed up to her crazed, former student to save the Pokémon, but was attacked by the thief, who ran off into the dark city.[9] In Chapter 47, "VS. Persian", Yellow chased William into the city, releasing her Doduo and Rattata to battle William's Paras, Persian and Marowak. William held Pika close, immune to its electric shocks, and ordered his Marowak to use Bonemarang, soaked on Yellow's Pokémon.[10]

In Chatper 48, "VS. Paras", Yellow withdraws her Pokémon and tackles the Bonemerang attack head on, attaching her Poké Balls to it, using her Rattata and Doduo to direct the bone at William himself. As he tried to right himself, the Alliance of Justice, a group of gym leaders, composed of Misty, Brock, Erika and Blaine, intent on defeating the antagonistic Elite Four, cornered the William, battling with their Onix, Starmie, Gloom and Rapidash, to save the unconscious Yellow, and rescue Pika from the impersonator.[11] 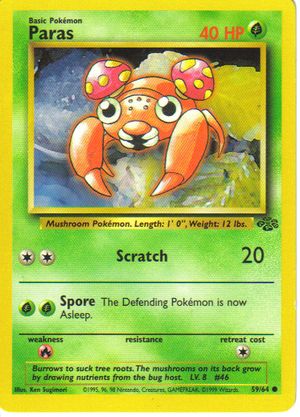 The Pokémon Trading Card Game is a collectible card game similar in goal to a Pokémon battle in the video game series; players must use cards (with individual strengths and weaknesses) in an attempt to defeat their opponent by "knocking out" all of his cards.[12] The game was first published in North America by Wizards of the Coast in 1999, until Nintendo USA started publishing the series in 2003.[13] Most Paras cards are typical, Basic Pokémon cards, and are primarily used to play stronger cards (such as Stage-1 Pokémon, like Raichu, or Stage-2 Pokémon, like Charizard).[14] Paras have appeared in the Jungle, Base Set 2, Gym Challenge, (as "Erika's Paras") Neo Revelations, Aquapolis and EX FireRed/LeafGreen sets.[15]