The name Parasect is derived from the words parasite and insect, in reference to the parasite-host pairing and Parasect's Bug type.

Parasect looks a little like a hermit crab, but instead of a shell, this Pokémon has a large spotted mushroom cap fixed on top of its body. Parasect also has four legs and two large pincers. Its two eyes are completely white and pupil-less.

Parasect as a whole consists of the actual crab-like Pokémon and its symbiote, a large mushroom with a spotted cap which is attached to Parasect's back. While the mushroom parasites can already be seen on its pre-evolved form, Paras, in Parasect the relationship between host and parasites has said to have become more unbalanced - the fungal parasite has apparently taken over the host organism instead of merely coexisting along with it.

Parasect's habitat and way of life are greatly influenced in favor of the mushroom's interests. A Parasect chooses to make its home in damp and dark places fit for fungi, such as caves or underground. It is nourished by draining nutrients off the roots and lower trunk of large trees, nutrients which are in turn extracted off Parasect's body by the mushroom. In this way, Parasect is both a parasite and a "victim" of a parasite, much like Cordyceps fungi, a spore that implants mushrooms in the host.

The mushroom "parasite" can scatter toxic spores in self-defense. The toxicity of the spores increases in proportion to the mushroom's size. Despite their hazardous properties, these spores form components of herbal medicine, a discipline practiced especially in China. The mushroom propagates itself by leaving spores on Parasect's eggs. That way, even when Parasect dies or is completely consumed by the mushroom, which is unproven, the species will hopefully live on in Parasect's offspring. This also explains the origin of the mushroom symbiotes found on the back of Paras. The mushroom is also prized for its numerous healing qualities-Parasect mushrooms are said to be a component in healing potions.

Parasect is a peculiar mixture of advantages and drawbacks. It features a high attack and it knows the move Spore, the only move that induces the Sleep status ailment without fail other than Yawn, which takes an extra turn to take effect. Its Effect Spore ability is also a very useful and versatile defensive measure.

On the other hand, Parasect's type combination of Bug and Grass make it vulnerable to a large number of attack types, including weakness to Fire and Flying-type attacks.

In Red, Blue, Yellow, when no Dark-type Pokémon existed yet and Mewtwo was thus nearly unstoppable, Scyther along with Parasect were popular choices against it by putting it to sleep with Spore, increasing Parasect's already quite high attack stat with Swords Dance and finally attacking with Leech Life, a weak Bug-type attack Mewtwo was nevertheless vulnerable against. Unfortunately, even in those days, Mewtwo often carried Ice Beam or Flamethrower to meet this challenge, surprising someone with this plan.

In today's metagame, Parasect is usually classified under UU or "underused." It is a Pokémon that has been largely superseded by better versions, particularly Breloom, which has a higher attack, fewer serious weaknesses, types to better fit its Fighting and Grass-type moves, and yet still learns Spore, all for the tradeoff of less special defense. Smeargle also learns Spore, and has better combinative (and less combustible) possibilities than Parasect.

Parasect's is fairly useful as a catcher, with its moves Spore and ability to learn False Swipe via TM.

In the animé[edit | edit source]

Parasect was first featured in episode #44 (The Problem with Paras), where a girl named Cassandra tried to have her Paras evolve into a Parasect, so that she could use its mushroom as an ingredient in a new type of medicine. It has had various other cameos over a number of episodes. It has been used by a police officer in episode #341 (Gulpin' it down) against some Gulpin, even though Parasect is weak against the Poison-type Pokémon.

In Pokémon Special, Crystal uses a Parasect extensively in her Pokémon capturing, using its Spore attack to put targets to sleep. In Volume 10, her Parasect is seen to be capable of increasing the radius of its Spore attack to at least three kilometres. In Volume 11, the origin of Crystal's Parasect is revealed: it, along with Crystal's Natu, Hitmonchan and Cubone, were wild Pokémon living in Mt. Mortar and had fought with a local Arcanine that had gone berserk from a severe eye injury. Parasect was able to create medicinal spores to help Arcanine heal and Crystal recover from her fractured arms. In Volume 13, Crystal reveals yet another ability of Parasect: it is able to use the powder attacks it possesses to combine into a wider range of spores, including one for corroding metals. 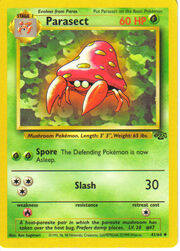 Parasect has appeared on four Grass-type Stage 1 cards. They are in: