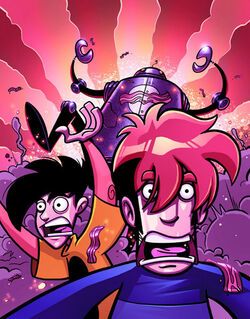 The name "Penny Arcade" also refers to a type of Arcade.

Penny-Arcade is a video game webcomic, which is published three times per week. It is one of the most popular and possibly one of the first. Strips the from series have appeared in countless other comics, magazines such as Official PlayStation Magazine and Computer Gaming World, and even game manuals. They have inspired other successful game comics, such as VG Cats and Ctrl Alt Del.

The comic focuses on the often-gaming-related mishaps of fictional characters John Gabriel and Tycho Brahe, aka Gabe and Tycho, which are loosely based on the comic's creators Mike Krahulik and Jerry Holkins.

An episodic video game based on the comic has had its first episode published under the title Penny Arcade Adventures: On the Rain-Slick Precipice of Darkness.

Penny Arcade started in 1998 with a much different art style. Jerry & Mike both went to highschool with each other, and drew comics as "sort of a hobby" in between their jobs to support their apartment & games. The characters originally had no name. There was the blue guy and yellow guy. Jerry & Mike, however, took up internet screen names. Jerry chose Tycho Brahe, named after a slightly weird but famous astronomer. Mike chose John Gabriel, due to his interest in angel lore. In 1999, the characters were changed to Jack and John, but those names didn't appear to last. The creators found that they were projecting their personalities onto a character, and (legend has it) decided that one would be Tycho and one would be Gabe. This is the explanation as to why the real Gabe & Tycho look nothing like their webcomic counterparts.

While doing their strip as a hobby, they tried to get their comic strip into Next Generation Magazine, who passed on them. Eventually, after growing a fanbase on the internet, it became one of the heavy hitters in the webcomic scene. However, all was not always well. The primary source of revenue & server space for Penny Arcade was provided by a company called eFront. eFront sponsored many popular websites such as Something Awful and ran banner ads on all of them and paid webmasters for clicks. However, it turns out, eFront ran out of money. For months, webmasters went unpaid yet were asked to cover their sites in more ads. Gabe took action to create a revolt with other webmasters, to the dismay of president Sam Jain. In private chat logs that were released by hackers/people within eFront, it was shown that Sam Jain & others even planned to fire Gabe and Tycho, take their intellectual property, and run the site and comic themselves. eFront went under, and many websites under their umbrella were unsure of their futures. Penny Arcade took a big step and asked for donations, which surprisingly, would support them for years to come.

In 2003, they started the now annual Child's Play charity, that asked gamers to help their reputation by donating toys, games, and books to a Seattle Children's Hospital. The first year was such a success (over $200,000 dollars raised) that they expanded it to several more hospitals in 2004. 2004 was also the beginning of PAX, the Penny Arcade eXpo. It was a huge gathering of gamers to play table top, tcg & video games, as well as interact with developers in panels, or see upcoming products from companies. Tycho has described it as "The consumers' E3".

Today, Penny Arcade still remains a giant in the webcomic scene and video game press, living off of advertisement money and merchandise sales. Companies such as Ubisoft even hire them to write special, bonus webcomics for their official sites. They are looking to continue their Child's Play and PAX traditions, as well as finally publish their second book under publisher Dark Horse.

Penny Arcade has, on some occasions, run into legal troubles, or were threatened with legal action.