Persian (ペルシアン, Perushian) is one of 493 fictional species of Pokémon in the Pokémon franchise. It is the evolved form of Meowth. Persian is named after the real-life breed of cat, the Persian.

Although its fur has many admirers, Persian are tough to raise as pets due to their fickle meanness. It will attack in an instant, and it can tear apart its prey on a mere whim. When it raises its tail straight up, it is a sign that it is about to pounce and bite.

The gem on its head glows on its own. Its light muscles allow it to walk without a sound, and it walks with all the grace and elegance of proud royalty. Many adore it for this sophisticated air. However, it will often lash out and scratch for little reason.

Persian has six bold whiskers that give it a look of toughness. The whiskers sense air movements to determine what is in the direct vicinity. It becomes docile if grabbed by the whiskers.

When Meowth evolve into Persian, they become less social. For this reason they move from the city into a grassy field area.

Like most evolved Pokémon, Persian are rarely found in the wild. However, it can be found in the Pokémon Fire Red and Leaf Green versions, in various places around the Sevii Islands, as well as in Silver and Crystal, found in the route to the right of Celadon City (Route 7). It is otherwise universally obtained by evolution from Meowth at level 28.

Persian has fairly unremarkable total stats (except for high speed) but exhibits some surprising features, like its ability to learn Aerial Ace, Water Pulse, Shadow Ball, and Thunderbolt through TMs. It also learns supportive moves like Swagger, Hypnosis (the third fastest user of this move), and Fake Out. Persian is considered a Pokémon for players aiming to have creative teams.

In Pokémon Mystery Dungeon, a Persian runs the Felicity Bank in Pokémon Square.

Giovanni, the man leading Team Rocket, has a pet Persian. Perhaps not coincidentally, his behavior with the cat looks very similar to other evil-mastermind-and-cat pairs, such as Inspector Gadget's Dr. Claw, Ernst Stavro Blofeld from the James Bond films, and Dr. Evil from Austin Powers.

Another Persian lives in Hollywood and helped Team Rocket's Meowth to start out in life.

A trainer who lives on the same island as Prima/Lorelei has one.

A Persian fought Tyson's Meowth for the leader of the pack.

In Pokémon Adventures, a Persian is owned by William, a supernerd and recurring character. It is also a Pokémon used by Neo Team Rocket in the Johto saga.

In Volume 4 of Pokémon Special, Super Nerd William is seen using a Persian to attack Yellow. It scratched the walls of buildings to create dissonance to disorient Yellow.

The same Persian is seen again in Volume 12 as William spars against Boy Scout Bozz's Haunter. 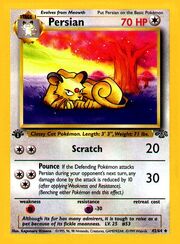 Persian has appeared on several Stage-1 Colorless cards in all the following sets:

Persian has also appeared as the 17th Promotional card, Dark Persian. Interesting to note here is that it is identical to the Team Rocket Persian in all except artwork. However, its first attack has a different name from the first attack of the other card, even though they achieve exactly the same effect.