Yukio first pitched the game to Microsoft as a card battling video game much like Magic: The Gathering with pictures of cards and a whole new card system. Microsoft rejected the idea because they thought that the game would not sell to the majority of Xbox owners. Yukio then reworked the format until he came up with a faster style of gameplay than what is traditionally found in CCG's. A game that involves equal amounts of planning, strategy, and twitch gameplay. Something that Microsoft would approve of.

In spite of the fact that Microsoft Game Studios Tokyo was given the green light to create Phantom Dust Microsoft decided to give Phantom Dust a Japan only release. October 2004 the game hit the streets. Famitsu reviewed and gave it a 34 out of 40. Critics loved Phantom Dust's style of gameplay. Around January rumors started circulating that Majesco might pick up the title and give it the U.S. release. The rumor turned out true. 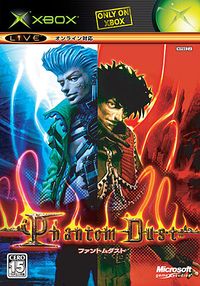 Before its release in the states there was a significant amount of people importing the game that sparked the fan site Phantom Dusted. Since the game was mainly played by Japanese players this allowed English speaking players a way to get together and organize games through the Xbox Live online service in addition to translations of the Japanese text. Along with Majesco's own website for Phantom Dust this continues to sustain a small and dedicated gaming community. As said by many people, Phantom Dust is a Love it or hate it game in addition to being a Niche title.

Gameplay in the Scenario mode revolves around going to the surface world to do missions. Regardless of the mission objective, whether it is to find a fellow human lost on the surface, or find a recipe for seafood gumbo, it invariably involves fighting one or more enemies. During the first two chapters, which are meant to serve as a sort of tutorial, you are forced to use premade "arsenals" (a case that holds a set of skills you can use to fight and defend yourself against the enemy) which never run out of skills. After the tutorial is over, though, you are given a real arsenal and you can buy skills to customize it.

At the beginning of a round four skills are randomly assigned to your controller buttons (X,Y,A,B) and displayed in your Heads-up display and three more spawn randomly at capsule points in your spawn area. In the few seconds you have before the match starts you can hit the Back button to reshuffle the assigned skills but only once. Skills in capsule form can be picked up by pressing one of the four buttons at which point they will fill an empty button or overwrite whatever skill is assigned to that button. After a short time, around 15 seconds, another skill will spawn in its place randomly from your arsenal. Using your four assigned skills it is your goal to do at least twenty damage to every opponent while they are trying to do the same to you or cause your opponent to use and pick up all of their 30 skills. After all 30 skills are picked up (or destroyed) the player will begin to lose one life every few seconds. Environment plays a big role in getting the advantage over your target. Matches can be won simply by using height and distance.

Skills and Arsenals can only be used by people who are called Espers.

Arsenal construction is one of the most involving parts of the game. An arsenal contains 30 slots, which are filled with skills and "Aura Particles." Skills are abilities you use in your fight against the enemy(s). Aura particles raise your Level during the fight, which allow you to generate Aura. Aura is spent to use the skills you pull from your arsenal. The selection of skills is impressive; there are 374 skills to choose from (including the 74 skills that can only be obtained through Xbox Live matches) spanning 5 different "schools": Psycho, Optical, Nature, Ki, and Faith. Each arsenal can hold only a certain number of schools (1, 2, or 3), so you must be careful in choosing the skills for your arsenal. If this wasn't complicated enough, there are 6 different types of skills contained in each school: Attack, Defense, Erase, Status, Special, and Environment. Attack skills allow you to damage your target. Defense skills allow you to defend against skills used on you. Erase skills allow you to erase your target's (and sometimes, everybody's) skills, level, or even arsenal capsules. Status skills affect you or your target's status, doing anything from raising your movement speed to making your enemy's attacks do less damage. Special skills have effects which do not fall in any other skill type. Environment skills generate an Environment "crystal," which exerts a special effect on everybody until the crystal is removed by somebody, or somebody's erase skill. For more information on the skill types, please see: Attacks, Defenses, Erase, Status, and Specials. For a list of all the skills available in the game, please see The Complete Skill List

For more information about Skills and their effects see: Skill

This is where the player is put into an underground city and a lot of the explanations for the Dust are found. There are 114 mission that you must complete to beat the game. These missions are triggered by talking with the inhabitants of the underground city. You travel to the surface during these mssions where you have psychic powers. After prolonged exposure the Dust will cause a person to lose their memory. This is the reason why surface trips are limited to fifteen minute intervals.

Multiplayer is limited to a max of four players. The development team tried eight player matches but the gameplay became too hectic so the limit was decided. All players can talk to each other in the lobby and interestingly during the loading screen before a match.

Battle Royale puts you against 1 - 3 players. It's every person for themselves in this gametype (Free for all)

A very simple gametype that can lend itself to "dirty" tactics. It's not uncommon for disadvantaged players to run and hide to cause a draw.

A gametype where team A is set against team B. Teams are decided in the lobby by each player. You can play normal 2 on 2 or, if you think your tough enough, 3 on 1. Teams can not hear each other in the match although there is one skill that allows you to eavsedrop on the other team. There is also a few skills that are geared toward this gamemode.

Caution: Due to how teams are decided, picked by each player, it is possible for a player to switch teams and the host to launch the game. This will create a 3 on 1 match that even the best Phantom Dust players will need the best of luck to win. Currently there are people on Live that are doing this on purpose for the easy win. If you are not playing with friends, like through Optimatch, keep an eye out for a player to switch teams. If you are quick enough you can switch teams and the host cannot launch the game.

Rules allow for modification of the above gametypes through preset subtle and not so subtle changes.

The name says it all. 20 life, 15 minutes. Wins here count towards your rating and win count that gets the rare Live skills.

Same as Standard Battle above but one skill is taken from the loser's arsenal. With rare online skills this rule is very risky. Counts towards rating.

Same as Standard Battle except players are given use of a random arsenal. Great for new players although it counts towards your rating.

Level is limited to a max of five and max life of ten. Does not count towards rating.

Players start with level 5 and 40 life. Levels can not be reduced below 5 so skills that lower level as a addition cost to a skill can be heavily abused here. Does not count towards rating.

The only difference from this and other variations is tha at the start of the match a random Environment Skill is in effect. Every minute another randome skill replaces the last. Any skill that destroys ENV's destroy the current one in place and it is immediately replaced by another random ENV skill.

Only one school arsenals are allowed.

In Highlander there is the saying "there can only be one". Well, in this variation arsenals with only one of each skills are allow excluding Aura of course.

Skills that cost more than 3 or X are not allowed in this variation.

Skills that cost less than 3 or X are not allowed in this variation.

A faster variation where each player has a cap of 5 life and the match lasts for three minutes. Once you die you respawn. The person with the most kills win. Much like deathmatch in FPS games.

In this variation it's 3 vs 1. The host being the lone fighter. The host is given 40 life while the other 3 players are given 10 life.

! - denotes playable character on Xbox Live and System link (Monster characters are accessed by holding both triggers in the character selection screen)

In addition to just being able to run around, capture capsules, and cast skills you can also use your character's special mobility/evasive maneuver. Characters can jump, cartwheel, or tumble.

Each character's move is predefined, and cannot be changed. You can also select special characters or monsters in multiplayer mode by holding down both shoulder buttons when you select a character. These characters may have strange maneuvers that are not like the ones listed above.

Phantom Dust begins with a surface expedition over a decayed landscape. Two pods are found containing two men in an unconscious state in the center of a huge crater, the two men are Edgar and the Protagonist (called the Protagonist because his name can vary depending upon the choice of the player). Having both been exposed to the Dust for a prolonged amount of time they can not remember much of anything. The Protagonist and Edgar set out on a quest to answer many of the questions they have. What happened to make earth such a desolate place with cites in ruins all over the planet? Where did the Dust come from? Why does the Dust give them psychic powers? Furthermore, why does the Dust cause memory loss? In regards to Edgar, who is this woman in the locket around his neck and why does he keep dreaming of her? Why does everyone have a vague recollection of this place they only know of as the "Ruins" but have no idea where it is?