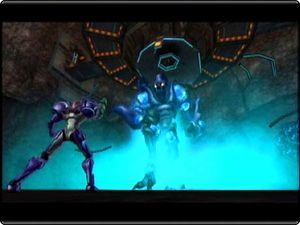 Phazon is a blue material with mutagenic and organic properties. Since it is a mutagen, it can cause serious mutations (similar to what the Space Pirates did to some inhabitants of Tallon IV), Phazon Sickness (where the subject goes mad and obsessed with Phazon), or damage to Samus's power suit. It is the main focus of the Metroid Prime series. The Space Pirates have been going to great lengths to mine it for use in their bio-engineering experiments.

Since discovering Phazon on Tallon IV in the first Prime game, and seeing its effects on the native wildlife, the Space Pirates have been enamored of its possibilities. They basically see the radioactive substance as free steroids. At one point, Metroids were introduced to phazon, which turned out to be a really terrible idea. Now Metroids can fire Phazon in electric-like blasts, warp in space and time, but are vulnerable to Phazon based attacks as well as cold based attacks, their weak point even before they were mutated by Phazon. These Metroids harmed both the Galactic Federation and the Pirates.

Phazon-enhanced Metroids are found in the Sky Town area (on the planet Elysia) in Metroid Prime 3: Corruption after you lower the shields that contain in containment cells by removing a energy cell from its power station and later, on the pirate ravaged ship G.F.S. Valhalla after the pirates that raided it released them on to it. The Pirate Homeworld also has a number of these Metroids.

In Prime 3, Samus gets hit by a Phazon blast (from Dark Samus) along with 3 other bounty hunters: Ghor, Rundas, and Gandrayda that causes their bodies to self- generate Phazon and allows them to use a variety of upgrades while in Phazon form, known as Hypermode. But if Samus and co. in this mode for too long they will enter corrupted Hypermode, where the Phazon meter that blue is supposed to go down with every shot turn red and go up. Failing to release the accumulated Phazon at this point by making the meter fill up to the top (it can be lowered by firing random shots) will cause her to become a clone of Dark Samus, which is an instant game over. Unfortunately, the other hunters suffered this fate and proved themselves hostile to Samus, which forced her to kill them for her own and the Galactic Federation's safety.

The origin point of phazon is a planet called Phazee, which is entirely made of the blue stuff. Phazee was different from other planets; it was alive. After many battles, Samus managed to arrive at Phazee, since it was veeeryy far away. Once there, she defeated Dark Samus and destroyed all the phazon in the universe.