Pichu is an electric-type Pokémon from the Pokémon series of games. It is one of the more well-known Pokémon due to being the pre-evolution of Pikachu, and being a playable character in Super Smash Bros. Melee.

Pichu charges itself with electricity more easily on days with thunderclouds or when the air is very dry. One can hear the crackling of static electricity coming off this Pokémon. Its cheeks are pink, and it has a small, plump body, a short tail and huge ears. When Pichu plays with others, it may short out electricity with another Pichu, creating a shower of sparks. In that event, this Pokémon will begin crying, startled by the flash of sparks, also because it's an infant.

Pichu is not yet skilled at storing electricity, and therefore it often sends out sparks when it is happy or if it has been startled. Any kind of shock causes it to discharge energy spontaneously. Despite its small size, it can zap even adult humans. However, if it does so, it also surprises itself. According to the Pokémon TV series, Pichu is so young that it often shocks itself when trying to attack an opponent.

Pichu first appeared in Pokémon Gold and Silver, and is one of many pre-evolutions introduced into the series. It is made by breeding two Pokémon in the Pikachu evolutionary line besides Pichu itself. It eventually evolves into Pikachu, which later evolves into Raichu by means of an evolutionary stone. It became a wild Pokémon in Pokémon Diamond and Pearl.

In Pokémon Emerald, Pokémon Diamond and Pearl Pichu can learn Volt Tackle as an Egg Move if its mother (a female Pikachu) is holding the Light Ball item.

A Nintendo GameCube game called Pichu Bros: Party Panic was in development but never released, featuring Pichu as the main character. Instead, the Mini-movie that should feature the game got integrated in Pokémon Channel as an imortant part of the story-line, along with Meowth´s Party, a second mini-movie that was meant to get it´s own game first and ended up as feature in Pokémon Channel.[1]

Pichu is an unlockable character in Super Smash Bros. Melee, voiced by Satomi Kohrogi. It has a similar moveset to Pikachu's (also a character in the Super Smash Bros. series), although its electric attacks inflict a small amount of damage to it, and it trades weight for power. In the trophy description, Pichu is described as an item grabber that is best suited for handicapped matches.

In the anime, there are two Pichus called the Pichu Brothers, first introduced in the animated short Pikachu and Pichu. Here, the Pichu Brothers (as well as Ash Ketchum’s Pikachu) are chased by a Houndour, and with the help of other Pokémon, rebuild their clubhouse. On a Pokémon short (“Camp Pikachu”) Ash’s Pikachu returns the favour to the Pichus by taking them to the train station to get them home. The Pichu Brothers also appear in Pokémon Chronicles, where they live in a large city which provides plenty of trouble for them to get into and they always end up making a mess while trying to have fun. However, they always find a way to fix their mistakes before the end of each episode. After re-appearing in the fifth short, they had an exclusive episode, “Pichu Bros. in Party Panic”, which is only available on the video game Pokémon Channel for the Nintendo GameCube. Also, in the Pokémon Advanced Battle episode “Lights, Camerupt, Action!”, a trainer shows some children a film about the Pichu Brothers (mentioned in a letter from a young girl).

Pichu also appear in the season 4 episode “The Apple Corp”, in which Ash and his friends are recruited to investigate the theft of apples from an orchard; the Pichu turn out to be responsible. These Pichu were not the Pichu Brothers.

The other Pichu is in Pokémon Mystery Dungeon: Team Go-Getters Out Of The Gate! as Pikachu’s little brother. After Pikachu gets captured by Skarmory, Pichu is worried and sad. He is aided by Team Go-Getters, and together they enter the sinister cave. When they make it out Pichu spots the treasure bag his brother was holding. Then Skarmory comes out of nowhere and captures Pichu. After being reunited with his brother, Pikachu apologizes for Pichu being captured. When the Go-Getters arrive, Pikachu tells Pichu to open the treasure bag and the seed falls out. Pikachu kicks the seed to Squirtle, who swallows it to gain super speed. After defeating Skarmory, the Go-Getters set Pikachu and Pichu free. The little Pichu worries about his big brother at first but learns fortitude and stoicism in his travails.

In the episode "Pikachu's Goodbye" Ash's Pikachu befriends a baby Pikachu in an electric Pokémon garden. Although this episode was before Pichu even existed, the baby Pikachu could be seen in some ways as a Pichu. The baby Pikachu's body was similar to a Pichu.

Gold owns a Pichu, the parents of which are Red's Pika and Yellow's Chuchu. 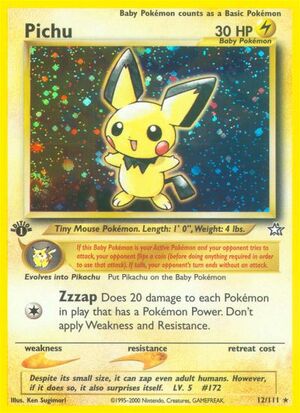 Pichu has appeared on six cards in the Pokémon Trading Card Game as a Lightning type Pokémon. In the Neo Genesis and Expedition sets, it is a Rare Holographic card. Also in Expedition, as well as EX Sandstorm, it is a Rare card. It is only a Common card in the EX Emerald set. Additionally, it is the 35th promotional (Promo) card.

The first Pichu card released was the extremely rare 1st edition Japanese edition in 2002. This is still to date one of the rarest Pokémon cards ever released along with ancient Mew and Pikachu's birthday.