Pidgeot (ピジョット, Pijotto, Pigeot in original Japanese language versions) is the final evolution stage for a pidgey. The name "Pidgeot" is a variation of the name "Pidgeotto", the Pokémon from which it evolves, and is based on the word "pigeon", and is a semi-homonym of "pigeon hawk" as well. Its name in the English beta version of Pokémon Red and Blue was "Pidgeott".

Pidgeot appear very similar to Pidgeotto. However, the feathers of Pidgeot’s crest are much longer, as is its body.

The glossy feathers of Pidgeot’s plumage have been described as "dazzling", and some trainers choose it solely because of its beauty. Its head is adorned with a gorgeous crest of pale yellow and red-orange feathers, complemented by its red-orange tail. Like Pidgey and Pidgeotto, it has a pair of intimidating black stripes behind its eyes. It spreads its large wings wide to intimidate its foes. Flapping these wings with their powerful chest muscles, Pidgeot are capable of whipping up gusts of wind similar to tornadoes. Pidgeot are very aerodynamic, capable of soaring to an altitude of 3300 feet and reaching speeds of up to Mach 2. Like Pidgeotto, Pidgeot feed on Magikarp by swooping from the sky and snatching them out of the water.

Pidgeot are not catchable in the wild, but they evolve from Pidgeotto, which in turn evolve from the fairly common Pidgey.

Pidgeot are vulnerable to Electric, Ice and Rock attacks. Grass and Bug types are sparsely effective against them. Pidgeot are fully immune to Ground and Ghost-types attacks.

On his way to the Orange Islands, Ash encountered a Fearow with an old grudge against him. It also happened to be terrorizing a flock of Pidgey and Pidgeotto with its flock of Spearow. Ash’s Pidgeotto finally evolved into Pidgeot to battle Fearow, and Ash left it behind to protect its new friends, with a promise to return for it after visiting the next gym.

One of the trainers in Pokémon: The First Movie owns a Pidgeot (referred to as Pidgeotto due to a dubbing error).

Falkner, the Violet City Gym Leader, also has a Pidgeot. It fights with Ash's Charizard but is eventually narrowly defeated.

In Hoenn, an Officer Jenny with a Pidgeot helps Ash reunite with Pikachu.

Along with many other of Ash's previous Pokémon, Pidgeot is featured in the 10th Japanese anime opening.

In Lucario and the Mystery of Mew, Sir Aaron has an oversized Pidgeot.

In the trailers for the tenth movie, Ash is seen riding a Pidgeot. Hopefully, this means Pidgeot will be making a return, nine seasons after it left.

In the Pokémon Adventures manga Blue has a Pidgeot, which he sometimes uses for transportation or to relay messages. 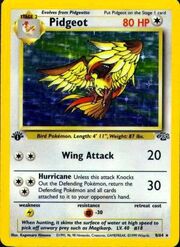 Pidgey and Pidgeotto cards were available in the Pokémon Trading Card Game Base Set, but Pidgeot was not available until the Jungle set was released. Pidgeot’s appearances in the TCG were in Jungle (included in Base Set 2 and the Legendary Collection), Southern Islands, Pokémon *VS (as Falkner’s Pidgeot, a basic Pokémon), Expedition, EX FireRed & LeafGreen, and EX Holon Phantoms (as Pidgeot δ, Lightning/Metal type) along with appropriate Pidgey and Pidgeotto cards. It also appeared in the 8th movie promotional half-deck in Japan (as Aaron’s Pidgeot, a basic Pokémon).

When the original toy Pokédex was released a little after Pokémon Red and Blue, there was an error involving Pidgeot. Although it was available in the Pokédex's lists, the Search function came up with an error message whenever a user attempted to search for Pidgeot. It is believed that the unsophisticated technology used to create it (as it is simply a children's toy) is incapable of perceiving Pidgeot and finding it in its database when there is a Pokémon with a similar, yet longer name (Pidgeotto).