Pigeotto is well known for evolving from one of the Pokémon encountered in the first route in Pokémon Red and Blue (and their remakes Pokémon FireRed and LeafGreen) Pokémon Yellow, Pokémon Gold and Silver and Pokémon Crystal. The purpose of Pidgeotto in the games, anime and manga, as with all other Pokémon, is to battle both wild Pokémon, untamed creatures encountered while the player passes through various environments, and tamed Pokémon owned by Pokémon trainers.

The name Pidgeotto is a variation of the name Pidgey, the Pokémon it evolves from, and is based on the word pigeon. The Japanese name ピジョン Pijon is derived from pigeon, a bird.

Pidgeotto are large birds, perhaps based on the Osprey and Merlin, with sharp talons, a red and yellow feathered tail and a red crest on its head. It looks very similar to its final evolution, Pidgeot. The difference between the two is Pidgeot's headfeathers are longer than Pidgeotto and Pidgeot is larger than Pidgeotto.

Pidgeotto's shiny form has duller feathers on its body, and a gold beak, talons, crest and tail feathers.

Pidgeotto are extremely territorial, generally claiming a large area with its nest built in the center. Full of vitality, it constantly patrols its territory, mercilessly punishing intruders. It flies about in circular patterns while hunting, and can spot the movements of its prey on the ground no matter how high it flies. Pidgeotto then attacks with its wickedly sharp talons and carries its prey, including Exeggcute and Magikarp, back to its nest from as far as 60 miles away - or more.

It appears on the Routes 14, 15, & 21 in Red/Blue/Green/Yellow. In Pokémon FireRed and LeafGreen, it appears in Routes 13-15, Three Island Bond Bridge, Three Island Berry Forest, & Five Isle Meadow. Being its evolved form, Pidgeotto is less common than Pidgey. Its statistics are mostly average or below, though it is quite fast. In FireRed and LeafGreen, Pidgeotto can learn a new move called Featherdance at Level 34, which sharply decreases the foe's attack power. A shadow Pidgeotto can be obtained in Pokémon XD.

In Pokémon Stadium and Pokémon Stadium 2, Pidgeotto emits a cry that sounds similar to the Great Northern Diver/common loon when summoned in battle, unlike its raptor-like screech in most other games.

In the Pokémon anime, Ash Ketchum caught a Pidgeotto in an early episode. It is often used to blow away Weezing's smokescreens and pop holes in Team Rocket's balloon. It remained one of the feature members of his team throughout his Indigo League challenge. When Pidgeot helped save Pokémon near Pallet Town, Ash thought it would be best for it to stay and protect them. Ash left Pidgeot before going to the Orange Islands.

Much later, in Hoenn, an old trainer with a Pidgeotto tutors Ash’s Swellow, which is trying to learn Aerial Ace.

Pidgeotto was voiced in both versions by Megumi Hayashibara. 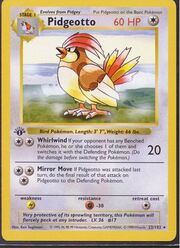 Pidgeotto appears several times in the Pokémon Trading Card Game, in the Base Set (also in Base Set 2 and the Legendary Collection), Gym Challenge (as Koga’s Pidgeotto), Expedition, and EX FireRed & LeafGreen. It also appeared in the 5th movie promotional half-deck in Japan (as Altomare’s Pidgeotto, a basic Pokémon).

In the Pokémon Adventures manga, a Pidgeotto attempts to abduct Yellow’s Caterpie, probably for food, but is stopped by Yellow’s Pikachu, Pika. Falkner also has a Pidgeotto when Gold meets him.