Pidgey (ポッポ, Poppo in original Japanese language versions) is a bird Pokémon made probably to represent a pidgeon. Its name comes from the word pidgeon, although could also be a combination of pigeon and pudgy. Its name in the English beta version of Red/Blue was “Pidge”. Its Japanese name comes from the onomatopoeia describing the cooing pigeons make. It evolves into a Pidgeotto then into a Pidgeot.

It is quite docile and non-confrontational. Often found hiding in tall grass and foraging for small insects to eat, it does its best to avoid battle. Its two shades of brown feathers and black stripes behind its eyes (possibly working like a tiger's stripes) would make a good camouflage for sandy or grassy areas. It will either blow small or weak foes away with its Whirlwind, or kick up dust in a Sand Attack to blind its enemy. It dwells in forests and grassy areas, and is able to return to its nest from anywhere thanks to an astoundingly sharp sense of direction.

Pidgeys are common throughout large cities and they often make their home on the ledges of tall buildings or tall structures.

Pidgey are one of the easiest Pokémon to capture and tame due to their docile nature. Capturing a Pidgey is a good test of a beginning trainer's abilities and is said to be a perfect example of a Starting Pokémon, though it is never actually offered as one in the games.

Pidgey appears in Pokémon Red and Blue, Pokémon Yellow, Pokémon Gold and Silver, Pokémon Crystal and Pokémon FireRed and LeafGreen in the Kanto and Johto regions and is usually one of the first Pokémon the player encounters.

Pidgey is vulnerable to Electric, Ice and Rock attacks, but invulnerable to the Ghost- and Ground-types, and strong against Grass, Fighting, and Bug.

With generally low statistics, Pidgey isn't a very strong Pokémon to begin with; however, it evolves into Pidgeotto at a relatively early level 18 and into Pidgeot at level 36(32 for older games). In FireRed & LeafGreen, Pidgey made its return to the Pokémon games, gaining a new move it could learn in the process, Featherdance, which lowers the opponent's Attack stat by 2 levels. It can also learn Air Cutter as an egg move.

Pidgey is introduced in the very first episode of the Pokémon anime, but Ash fails to catch it; however, he does catch its evolved form, Pidgeotto, two episodes later. It is a common Pokémon, and many junior trainers have one. Pidgey are sometimes used as mail carriers (as seen in the episode Carrying On), and in “Fly Me to the Moon” a Pidgey named Orville (named after one of the Wright Brothers), who dreams of flying higher than any Pokémon, manages to reach the upper atmosphere.

In the Pokémon Adventures manga, a robotic Pidgey serves as Red’s guide to the Safari Zone. 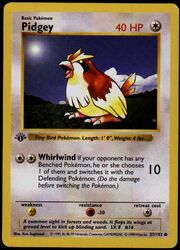 Pidgey is a common Colorless Pokémon in the Pokémon Trading Card Game, appearing in the Base Set (also in Base Set 2 and the Legendary Collection), Gym Challenge (twice, both as Koga’s Pidgey), Expedition, EX FireRed & LeafGreen, and in EX Holon Phantoms (Delta Species, Lightning Type)