Piloswine(イノムー, Inomū, Inomoo in original Japanese language versions) are one of the fictional species of Pokémon creatures from the multi-billion-dollar Pokémon media franchise—a collection of video games, anime, manga, books, trading cards, and other media created by Satoshi Tajiri.

Piloswine's name is a combination of either the word pilose or the prefix "pilo-", which means either hair or is a corrupted form of the phrase "pile of", and swine. The "pilo-" could also be a purpose misspelling of Pliocene, given the resemblance to a mammoth, or pillow, due to its lazy nature. Its Japanese name appears to be a mix of the word Ino (boar) and the sound moo.

Piloswine's appearance has elements of wild boar as well as the mammoth, but overall most resembles a musk ox, both in appearance and lifestyle. It is a quadruped with a bulky body covered in shaggy brown fur. It has a pig-like snout, floppy ears and a pair of curved tusks.

Piloswine thrives in cold climates. It has adapted to such inhospitable environments; its thick fur which covers its body almost completely shields it against the low temperature, while its rugged hooves provide traction on slippery and friction-less ice surfaces. Piloswine also uses its tusks to forage for food that has been buried under ice.

Piloswine's long hair limit its visibility severely, but it compensates for that by being extremely sensitive to sound. If an ill-meaning individual makes an incriminating noise, Piloswine will home in on the threat and charge at it repeatedly, since it can't see clear enough to tell when the danger has been neutralized.

In Pokémon Diamond and Pearl, Piloswine gains a new evolution called Mamoswine. Piloswine evolves by leveling up after it has learned the move AncientPower. It can also learn the move Earthquake by level and without requiring the usage of a TM, but only in Diamond and Pearl.

Piloswine has been featured as a Pokémon of Pryce, the Mahogany Town Gym Leader. When we first see Pryce (episode #239- As Cold As Pryce), he takes the feelings of Pokémon very seriously because of an incident years back. He and Piloswine used to be inseparable, until in a tournament when it battled a Houndoom and got injured. It apparently ran away, leaving Pryce devastated and changed.

As the episode continues, Ash and Pryce reach a cave that apparently has Pryce's old Piloswine, frozen. It turned out that Piloswine wanted to show Pryce its independence by searching for Burn Heal herbs on its own, but ate too much and got frozen. They defrost it and revive it, and in episode 240 (Nice Pryce Baby) Pryce uses his long-lost Piloswine against Ash.

Piloswine appeared in Volume 9 under the control of Keane, who used its sheer power to devastate Ecruteak City with an Earthquake. However, Silver defeated it easily with Gold's Politoed. 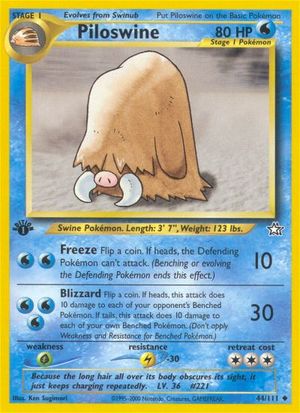 Piloswine has a healthy number of stage-1 card appearances, all blending Ice and Ground abilities in the following sets: