Pineco (クヌギダマ, Kunugidama in original Japanese language versions) are one of the fictional species of Pokémon creatures from the multi-billion-dollar[1] Pokémon media franchise—a collection of video games, anime, manga, books, trading cards, and other media created by Satoshi Tajiri.

Pineco were first made available in the second generation, Gold/Silver/Crystal (often referred to as GSC, denoting the names of the different games released for that generation), and were one of the few Pokémon that could be found by having the player character's Pokémon use the move Headbutt against a tree. The name Pineco is created by shortening the word "pinecone," the plant-organ which it so closely resembles. The French Pomdepic is likely an alternate spelling and combination the words pomme (apple), de (of), and pic (peak), similar to the French word for potatoes, "pommes de terre," (apples of the earth). Pineco, like all Pokémon species names, can be used as both the singular and plural.

According to the in-game Pokédex, Pineco remain mostly inactive, preferring to hang in trees waiting for their prey to come to them, much like real-world pitcher plants and Venus flytraps. Likewise, their diets consist mostly of small flying insects. Pineco are capable of spitting out a sticky liquid that hardens when exposed to air. This is most likely the mechanism by which they catch their food. They also use it to glue pieces of bark to themselves for protection, making them bigger and their hide more durable, like the bagworm from which it takes its classification. It could also be used to stick itself onto trees.

Pineco are also very high strung and temperamental, given to exploding if startled or annoyed. This is referenced not only in its Pokédex entry, but also several times in the anime. This tendency is common to Pokémon that inherently know moves like Explosion or Self-Destruct (like Electrode and Voltorb), as opposed to ones that must be taught them.

Pineco first appeared in Pokémon Gold and Silver along with a number of other Bug Pokémon, including Scizor, its evolution Forretress, and Heracross. The only way to catch one in Gold, Silver, and Crystal is by having a Pokémon use the Headbutt attack on a tree. This was a new mechanic added to the game, but never seen again in future releases. In Pokémon Emerald, it is available in the Safari Zone once you beat the Elite Four. It can also be snagged in Pokémon XD: Gale of Darkness. Besides explosion moves, Pineco are able to use attacks that utilize sharp objects like Spikes and Pin Missile. Additionally, like many round Pokémon, Pineco can use the move called Rapid Spin, attacking their opponents while at the same time freeing themselves from specific multi-turn attacks.

Most of a Pineco's damage-dealing moves involve directly hurling itself at its target, but a trainer can teach it several other attacks that reflect its close association to the forest - like the Grass-type Giga Drain and Solarbeam, and the Ground-type Earthquake and Sandstorm. Several of Pineco's attacks (those innately known, taught, or brought out by breeding) are also very passive in nature, reflecting its proclivity to sit and wait. These include attacks like Bide (where, quite literally, the Pokémon will "sit and wait" over several turns, storing up energy to launch a powerful attack), Counter, Protect, and Reflect.

Pineco have the ability called Sturdy (abilities weren't introduced until the third generation) which prevents them from being defeated by OHKO (One Hit KnockOut) moves. (OHKO refers to certain moves that while very inaccurate are able to cause the target to faint single-handedly.)

Pineco first appears in Goin' Apricorn! (American episode #145). Brock catches a Pineco to save it from an Arbok's attack, making it the first Pokémon he catches in the Johto region. It soon becomes one of his most used Pokémon, exploding in Brock's face to express every emotion from joy to fear. It later evolves into a Forretress, replacing its tendency to explode with the almost always used Rapid Spin. In the anime this becomes Forretress's signature move as Brock uses it to do everything from crashing through walls to creating tornadoes to reflecting various attacks.

In the Pokémon Special manga, Pineco first appeared in Volume 9. Red fights two in his aptitude test to be the Gym Leader of Viridian City. 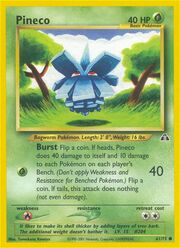 Pineco has made appearances as a basic stage, grass type Pokémon in the following expansions: