Pinsir (カイロス, Kairosu, Kailios in original Japanese language versions) is a Bug-type Pokémon which appears consistently in the Pokémon series; the only Pokémon RPG it hasn't appeared in is Pokémon Red. Its exoskeleton is brown-colored with two large spike-covered pincers on its head. It uses these horns to catch and immobilize prey. The name "Pinsir" is derived from "pincer".

Pinsir is covered with a thick exoskeleton. Pinsir uses its pincers to crush enemies. It builds its strength and stamina by crushing boulders. The pincers are adorned with sharp spikes which serve to damage foes caught in the pincers and to prevent escape. If it fails to crush its foe, it will throw the foe powerfully against the ground or into another object with its pincers. It can lift more than twice its own weight.

Pinsir requires warm habitats to survive. It becomes immobilized in cold climates. It burrows itself into dirt using its pincers and sleeps in the burrow through the night. When it emerges damp soil clings onto its body. It is also known to sleep in treetops.

Pinsir were first available in Pokémon Blue and Pokémon Yellow, and were one of the few Pokémon who were exclusive to the Safari Zone. This exclusive availability was repeated with the remake of the first generation games in Pokémon FireRed and LeafGreen, where Pinsir is available on LeafGreen. Pinsir also have an exclusive availability in Gold, Silver, and Crystal's Bug Catching contest. Pinsir is also rarely found in Pokémon Sapphire deep in the southeast end of the northwest region of the Hoenn Safari Zone.

Pokémon Diamond and Pearl are the first games Pinsir are able to naturally learn a Bug-type move, X-Scissor. Before, Pinsir could only acquire a Bug-type move using Hidden Power. It also gains the special ability Mold Breaker, which cancels out other effects.

In terms of statistics, Pinsir have excellent Attack, good Defense and average Speed.

Wild Pinsir are not found in the Nintendo 64 game Pokémon Snap. However, in the Tunnel Course, if the place is powered up by Zapdos, a series of objects near the end of the course will cast a shadow on a wall in the shape of Pinsir’s silhouette. This is one of six Pokémon Signs that must be photographed to gain access to the seventh course.

Pinsir first appears very early in the series, "Challenge of the Samurai" (#4). In the episode, Samurai uses Pinsir to battle Ash's Pidgeotto. Pidgeotto is swiftly defeated with a Tackle (note: Pinsir cannot learn Tackle in the Pokémon video games). Ash then sends out Metapod and tells Metapod to use Harden. Pinsir's claws try to crack Metapod, but instead they break.

In an early Johto league episode, Ash and friends come across a group of Pinsir that share one half of a forest, the other half owned by Heracross (and a group of Butterfree). Team Rocket are stealing the sap from the Pinsir's side using a mechanical Pinsir, the real ones are scared away and instead frighten away the Heracross. With the help of a Heracross that later joins Ash's team, and Ash's Bulbasaur, the mechanical Pinsir is defeated and balance is restored.

In "The Ties that Bind", Pinsir was one of the Pokémon seen in Gary Oak's profile. 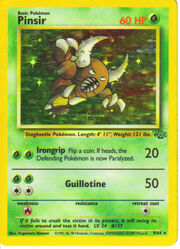 Pinsir, as seen in the Pokémon Trading Card Game

Pinsir appears in the following sets as a Grass-type Basic Pokémon: