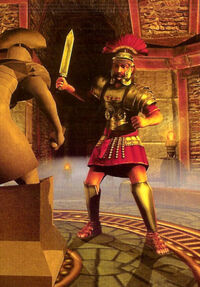 Born into a family of wealthy patricians, Pious Augustus joined the army of the Roman Empire at an early age. Pious was a centurion and commander during the empire's campaigns in Persia. He is now in his late twenties—many of his peers have retired to lives in Roman politics, but he remains a loyal soldier of the empire. Although Pious has grown weary of constant fighting, he continues, driven by the belief that life has a greater purpose in store for him.

Above text taken from game manual.