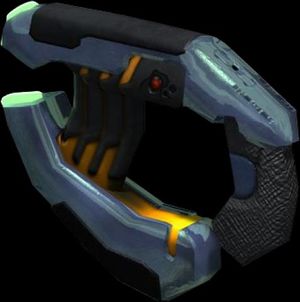 The Plasma Pistol is a Covenant firearm in the fictional Halo universe. It is a small handheld ranged weapon that fires bolts of viridian plasma in a direct trajectory. It can be fired in two modes: semiautomatic or overcharged. However, after sustained semiautomatic fire or after an overcharged bolt, the weapon tends to overheat rapidly, and the weapon must begin a several-second cool-down cycle to prevent catastrophic failure of the unit. Flaps extend, exposing the interior systems of the plasma pistol to the air, and it is temporarily unable to fire, often exposing the user to enemy fire and unable to return fire at inopportune moments.

It is powered by a power cell that provides the energy to heat and align the plasma bolts. It has an ammunition capacity of 100 charge units. Every semiautomatic bolt requires one charge unit, while every overcharged bolt requires approximately fifteen charge units, meaning that it depletes the battery much faster. After the cell is depleted, it can not be recharged or replaced, making it useful only as a brutish cudgel to hit enemies with at melee range. A new plasma pistol will need to be acquired to continue firing. The plasma pistol, like its relatives, the plasma rifle and the Brute plasma rifle, is small enough to be held in one hand. This means that two plasma pistols can be wielded at the same time: one in each hand.

Overcharging takes several seconds after the trigger has been pulled to create a sizzling, culminating ball of super-hot green plasma at the tip of the weapon. After charged, this unfired ball can be sustained indefinitely until the trigger is pulled. When fired, this overcharged ball of plasma travels with slow speed to its target, but with moderate homing properties. It is unknown how these homing properties are created. However, upon impact, the overcharged blast instantly destroys the deflector shielding of the target, whether it be the systems of a U.N.S.C. Spartan, a Covenant Elite or Jackal, or a deflector shielding emplacement. However, when the overcharged ball is being sustained before the trigger is pulled, it creates a loud and instantly recognizable sound, alerting nearby enemies to the presence of an enemy. The core power output to produce an overcharged blast is between 100 to 150 mV, which is a thousand times greater than the voltage needed to fire a semiautomatic blast. However, after a single overcharged blast, the pistol begins cycling through its cool-down cycle.