Platinum Hits is Microsoft's program to recognize and re-release the most popular games made for its' Xbox and Xbox 360 systems at a reduced price. Box art is changed to signify this fact, though how it is changed differs between the two systems.

On original Xbox, the MSRP is lowered to US$19.99. As far as changes to the box itself, the system bar that runs across the top of the front of the box is white instead of black, and the art itself is shrunk slightly to allow a border to run around it, with the "Platinum Hits" designation between the top of the art and the Xbox bar. See the two images below of Grand Theft Auto: San Andreas for an example; the one on the left is from the original release, and the one on the right is from the Platinum Hits re-release. The color of the case differs as well—instead of the standard Xbox green, the case is a dark gray-silver. 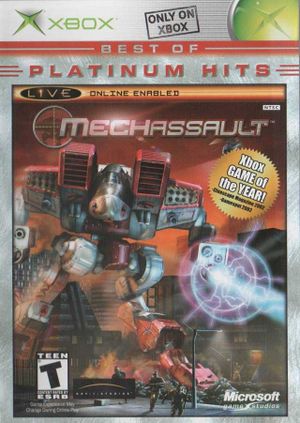 The "Best Of Platinum Hits" re-re-release.

Xbox 360 titles are lowered to US$29.99 MSRP when they become Platinum Hits. The case is changed from the standard translucent green to a translucent dark gray. The art itself is shrunk significantly and superimposed over a textured gray-silver background, off center, with the Platinum Hits designation in white and green lettering over the top. The system title bar is not changed. See the example of Need for Speed: Most Wanted below.

The Platinum Family Hits line has been carried over from Xbox, though as of yet, there is no corresponding Best Of Platinum Hits on Xbox 360.