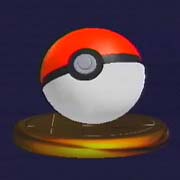 A Poké Ball, as seen in Super Smash Bros. Melee.

A Poké Ball (Monster Ball in Japanese) is a small mechanical ball used to catch Pokémon. There are numerous varieties of Poké Balls, but the most basic one is simply referred to as a Poké Ball. The Poké Ball is also the symbol of the Pokémon series, similar to Zelda's Triforce or Mario's Super Mushroom.

The function of Poké Balls is not only to catch Pokémon, but as a very easy and convenient means of carrying them around with you (without having to use items such as leash, which is convenient as some Pokémon can travel on land easily or by their size). Poké Balls are small, perhaps the size of a golf ball, for easy storage and carrying. When a white button is pressed along the seam of the ball's halves, however, it will expand to about the side of a softball, making it easier to throw and release the Pokémon inside.

When a Poké Ball is thrown at a Pokémon during a capture attempt, or when releasing/withdrawing a trainer's Pokémon, the Pokémon becomes a blob of red light/energy. This is never fully explained, but Pokémon shrink or compress in some way in order to fit into Poké Balls. Poké Balls can also contain items, which are found laying around in forests and caves, though the ball is presumably used up when the item is removed.

While trainers can carry as many empty Poké Balls as they want, they can only carry a max of 6 Poké Balls containing Pokémon at one time, according to the rules of the Pokémon League. When a trainer has caught more than 6 Pokémon, the Pokémon after that will be automatically transferred to PC Storage.

To catch a Pokémon, you first need a Pokémon. (It is presumed that most people buy their first Pokémon or are given one.) The Pokémon you are trying to catch must also be wild, and not already owned by another trainer, as the Trainer will block the ball. The effectiveness of a Poké Ball is determined by how it changes a Pokémon's chance of being caught.

When you throw a Poké Ball at a wild Pokémon, the game uses the following formula to determine whether it works or not. [1]

The role of Poké Balls is to add a multiplier to the above equation. See the graph below for each Poké Ball's multiplier.

Basically, players weaken the Pokémon to a certain extent and use the most effective ball available to catch it. If in some case the ball fails, players can try again and hope for a better chance to catch the Pokémon.

The following Poké Balls are in all Pokémon games:

You get these balls by giving Apricots to Kurt.

Pokéball's introduced into the Ruby/Sapphire games (and subsequently used in Emerald, Leaf Green and Fire Red and Colosseum and Pokémon XD versions)

Two new Poké Balls for Pokémon Diamond and Pearl have been unveiled so far. It is also assumed that R/S/E Poké Balls will be available as well, at the very least by attaching them to your Pokémon before transferring them over via the Nintendo DS GBA slot.