Politoed (ニョロトノ, Nyorotono in original Japanese language versions) is one of the 493 fictional species of Pokémon from the Pokémon Franchise – a series of video games, anime, manga, books, trading cards and other media created by Satoshi Tajiri.

Politoed bears a likeness to a large, bipedal frog. It has green skin which turns yellow at its paws, lower jaw and belly. Its belly is adorned with a green spiral mark, similar to its pre-evolutionary forms. On top of its head grows a long blue hair that is curled in a manner similar to the spiral.

Much like Slowking, Politoed dominates over its related species Poliwag, Poliwhirl and possibly even Poliwrath, probably thanks to the fact that the other Pokémon are all supposed to be tadpoles, while Politoed is a full-fledged frog.

Politoed's dominant status as "king" is displayed in the form of its single blue curly hair, which is an object of reverence among its "subjects". The longer and more curled the hair, the better respected the Politoed who sports it.

Politoed's Hit Points, Special Attack and Special Defense are very good, but its Speed and Defense are rather low considering its high stage of evolution. It can learn some handy moves, like Ice Beam and Earthquake which may cover its weaknesses to Grass and Electric-type Pokémon and the disrupting Swagger move.

Since the point of evolution for Politoed is entirely up to the player, it must be chosen with care, because Politoed learns very few attacks naturally. Depending on the moment of evolution, it can have access to some or all moves as its pre-evolved forms, granting it a certain versatility in battle.

Politoed is one of the Pokémon used by Misty. She obtained it when her Poliwhirl was withdrawn in its Poké Ball while holding the King's Rock Ash had previously won as a Pokémon sumo tournament prize. Note that this deviates from the video game evolution of Politoed, in that no trading is required. The same happens in a later episode concerning the evolution of Clamperl into Huntail or Gorebyss.

Misty's Politoed is strong and cheerful. It is frequently seen joyfully dancing around, in a manner similar to Ash's Totodile.

A Politoed appears as one of the many Pokémon owned by the Marina group. Politoed is a bit like a pet, not as much as Buizel, though. It barely ever preforms, but claps and dances in a humorous way, making it a part of the show. Politoed was only once seen in one of the water bubbles used in the performance, this was to pull Pikachu in with it. This lead to May, Max and Brock being put into bubbles as well. Politoed was of the many Pokémon eating when the show was over.

Brock's Croagunk dresses up like a Politoed in "It's Love! Pokemon Transformation Convention 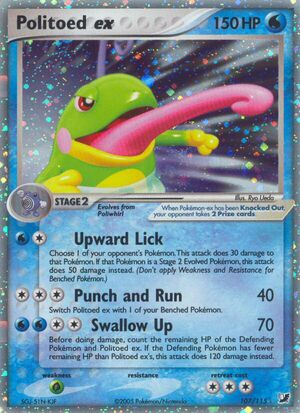 Politoed, despite being a stage-2 Water-type, has had only three cards in print:

This is in stark contrast to its partner Poliwrath, who has had seven cards printed under different types. However, Politoed cards have quite an influence as powerful attacking cards, and this is most true of Politoed EX. This card is agreed by many Pokémon TCG players to be one of the most devastating Pokémon currently in the card game. It has 150 hit points (uncommonly high) and three attacks, the most fearsome of which is the third, Swallow Up. This attack has the capability to do tremendous damage to your opponent's active Pokémon (up to 120 damage) based on whether or not Politoed EX has more hit points remaining than the Pokémon it is attacking. This attack best reflects Politoed's traits of having a really big mouth and belly and how it is not afraid to use them.

Politoed's name is a portmanteau of the words polliwog, toad, and toe. The "Poli-" part is merely used to indicate a relation to previous forms, as this Pokémon looks much more like a frog than a polliwog. The "toed" part is obviously a play on the word "toad." The Japanese version of the name is probably onomatopoeic: "Nyoro nyoro" describes "wiggling" or "squirming" or "slithering", which is how a tadpole, or a "Poliwag", its most basic form, would move.