The name Poliwag is a portmanteau of pollywog, another name for a tadpole, and wag, which means to move a body part (in Poliwag's case, the tail) rapidly from side to side. The Japanese version of the name is probably onomatopoeic: "Nyoro nyoro" describes "wiggling" or "squirming" or "slithering", which is how a tadpole or a "Poliwag" would move. According to the Pokémon Special (#3) for the Official Nintendo Magazine, Poliwag was the first Pokémon to be designed by Satoshi Tajiri and Ken Sugimori. It is Tajiri's favorite Pokémon. He likes how the swirls on its stomach "are where its intestines should be".[1]

Poliwag are very young in their life cycle, with newly-grown legs that are still tender and weak. Poliwag's tail, however, is quite strong, allowing it to swim at great speeds without fatigue and slapping enemies silly. Hence, it prefers swimming through ponds and rivers than walking. The belly of Poliwag is characterized by a large, hypnotic swirl-shape. The swirl is actually Poliwag's internal organs, visible through its soft, thin and translucent skin. The direction of this swirl differs from area to area. The equator is thought to have an effect on the direction of the swirl. Poliwag's swirl can be used for Hypnosis. Poliwag's thin skin is very rubbery, and works as protection from danger. Even sharp objects will bounce right off.

Poliwag is a generally widely spread Pokémon and is available in the Red, Blue, [[Pokémon Yellow|Yellow]], Gold, Silver and [[Pokémon Crystal|Crystal]] games. Poliwag can be found in Red/Blue by fishing at Cerulean City, Vermilion City, Pallet Town, Viridian City or Routes 22. Poliwag can be found in Yellow by fishing at Viridian City, Route 22 and Route 23 he evoles at lv 26. Poliwag can be found in Gold/Silver by fishing or surfing at The Ruins of Alph, Blackthorn City, Ecruteak City, Ilex Forest, Mt. Silver, Violet City, Viridian City and in routes: 6, 22, 28, 30, 31, 35, 43, 44. In Crystal, it can also be found on Route 30, in the grass. Poliwag are also found in the Nintendo 64 game Pokémon Snap in the River Course. They will be obscured from view in the bushes to the right, but they can be driven out by Pester Balls, where they will charge towards the river and dive in. A close, clear photograph can be taken at this time. Poliwag's cry in the games is almost identical to Jigglypuff's (and the same as Ditto's) cry.

As a wild Pokémon, Poliwag has appeared numerous times in the Pokémon animé, with each appearance being mostly- if not entirely- incidental. One example of this is when he appeared in the lake with other Pokémon when the team visited Professor Oak. However, Poliwag has also appeared as part of a major character's team. While in the Orange Islands in the Pokémon animé, in the episode "The Stun Spore Detour", Ash and Tracey got themselves paralysed by a Vileplume's Stun Spore. Using Ash's Pokédex, Misty discovered the cure was a plant called Salvea weed which grew nearby around the habitat of wild Poliwag.

Ironically, Jessie from Team Rocket had been similarly stunned by a Vileplume (though it is unclear just how badly affected she was- Ash and Tracey could barely talk, Jessie found the energy to not only yell at James and Meowth, but to remain her usual animated self). James recalled Salvea weed as a paralysis cure from his childhood, and Jessie sent him and Meowth to find some.

Initially the ones to find it, James and Meowth scared Poliwag off, leading it to bump into Misty who defended it. James and Meowth spent much of the rest of the episode attempting to steal Poliwag, so that it may lead them to the Salvea weed, even going as far to dress up as a mother and baby to try and fool Misty- unsuccessfully, as usual. In the end, Poliwag helped Misty find a large amount of Salvea weed. Despite them causing her trouble, Misty was nice enough to leave some of the weed for Team Rocket, as she knew they were only trying to help their friend. After finding the Salvea weed, Misty was about to return to Ash, Tracey and Pikachu but Poliwag decided to stay with its new friends instead of remaining on its own in the wild.

For a long while after this point, Poliwag was one of Misty's most prominent Pokémon. Though it did not appear in every episode like Togepi did throughout its time in the anime, and wasn't perhaps quite as popular with fans as the ever-lovable Psyduck, Poliwag remained a staunch ally for Misty and was often used to thwart Team Rocket, put out fires or just battle.

In the Johto Journeys episode "The Totodile Duel", Misty and Ash both battled each other for ownership of a Totodile both believed they had captured. The final round of the battle saw Poliwag take on Bulbasaur. Bulbasaur eventually won the battle, meaning Ash earned the right to own and train Totodile (some fans believe it must have been Ash who captured Totodile in the first place, or else the Pokémon may not have been so obedient towards Ash). However, during the battle, Poliwag evolved into Poliwhirl and Misty was more than happy with her new Pokémon.

This same Pokémon remains a part of Misty's team today in Pokémon Advanced Battle and Pokémon Chronicles. In the Pokémon Master Quest episode "Outrageous Fortunes", Misty expected her Poliwhirl to evolve into a Poliwrath. Instead, it evolved into a Politoed. While initially upset at this turn of events, Misty has grown to love Politoed even more.

In Pokémon Special Poliwag makes a cameo in Bulbasaur, Come Home! as one of the Pokémon that escapes from Professor Oak's Laboratory and in Danger: High Voltorb in a Red's flashback remembering his journey with his Poliwhirl.

Gold has a Poliwag as of Volume 8. It was lost when Team Rocket stole Gold's backpack and its Poké Ball fell into the water. Gold eventually retrieved Poliwag at the Famous Fishing Zone. It evolved into Poliwhirl in Volume 9. 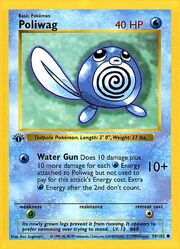 Poliwag has appeared several times in the [[Pokémon Trading Card Game]]. It has appeared in the following sets: