Poliwhirl is a portmanteau of polliwog and whirl. Whirl refers to the spiral on its stomach, while Poli is also the "family" name for this evolution chain. The Japanese version of the name is probably onomatopoeic: "Nyoro nyoro" describes "wiggling" or "squirming" or "slithering", which is how a tadpole or a Poliwag, its most basic form, would move.

Poliwhirl is a large, amphibious froglet-like Pokémon. Its hands make it seem as though it is wearing white boxing gloves. It is capable of living in or out of water; in order to live out of water, it must sweat to keep its body slimy. It prefers to live underwater in ponds where there is less danger.

In battle, it uses the spiral-shape on its belly to put the foe to sleep. It does this by subtly undulating the spiral, causing drowsiness and eventually sleep. It is also capable of easily escaping the grasp of foes due to its greasy skin.

Poliwhirl's mouth is no longer visible after evolution, but it is concluded that it moved to the center of its spiral, since it now sprays water from there.

Poliwhirl is obtainable in most of the Pokémon RPGs by surfing or fishing. Alternatively, Poliwhirl can be obtained by evolving Poliwag at level 25. It is unobtainable in the wild in Pokémon Ruby, Sapphire and Emerald but they can be found in Pokémon FireRed and LeafGreen. Poliwhirl has two choices of evolution. It can evolve into a Poliwrath via a Water Stone, or it can be evolved into a Politoed by trading it with the Kings Rock item attached. Poliwhirl was also featured as a trophy in Super Smash Bros. Melee.

In the Pokémon anime, Misty had a Poliwhirl in the Johto series. It evolved from the Poliwag she caught in the Orange Islands during a battle with Ash over ownership of a Totodile that they both simultaneously captured while fishing. While fighting Ash's Bulbasaur, her Poliwag evolved. Ash won the battle, but Misty was too overjoyed about acquiring her new Poliwhirl to be upset at her loss. It later evolved into Politoed.

Red starts his journey with a Poliwhirl and a Bulbasaur, the former being his friend for a long time, and had evolved into Poliwhirl from Poliwag to save him from drowning. It later evolves into Poliwrath to save Red from drowning a second time. Poliwhirl was the only Pokémon of Red's that fought in the battle against Lt. Surge to free all of the captured Pokémon(in which it evolved into Poliwrath), as Bulbasaur was floating nearby, while Pikachu was being cuddled by the Pokémon Fan Club president, probably an excuse to keep it in its unevolved state due to its massive Pop Culture value(there were perpetual Water, Fire, Thunder, and Grass Stones deep inside the sea which Red almost drowned in, thus inducing its evolution and would have done the same to Pikachu, which would make it a Raichu).

Much later in the adventures of Gold that took event three years later in Johto, Gold loses his Poliwag(trapped in a Monster Ball) when his bag containing the dozens of Pokémon he keeps in his bag to carry around was mistaken for that of his friend's by Team Rocket. He later reobtains it, however, and it becomes a permanent member of his team despite its childlike traits and fragility, due to the Pokémon box system having gone haywire. However, after having defeated several high-level Pokémon such as a ferocious Donphan in the day care center, it accumalates enough experience to evolve into Poliwhirl, but does not stay in the state for long, as it held a King's Rock given to Gold by the Day Care Lady, after which it is traded to Silver briefly, permanently evolving it to Politoed. It is used for later battles from then on as the water type of the team(but ironically, not knowing how to surf, possibly due to either its small size or not being used to its new evolved state, and thus being a Poliwag at heart), even managing to defeat Delibird of the seemingly unbeatable criminal known as Mask of Ice(revealed to be Pryce of the Mahogony Gym) with its Perish Song attack. 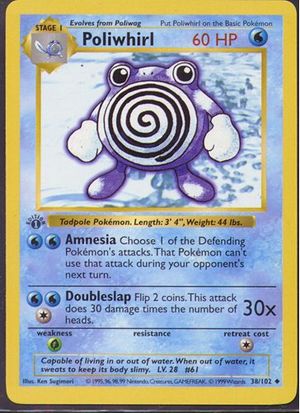