Poliwrath's name is composed of poli, which is derived from poliwag, and wrath, meaning "anger" due to its Fighting-type and ferocious attitude. The Japanese version of the name is probably onomatopoeic: "Nyoro nyoro" describes "wiggling" or "squirming" or "slithering", which is how a tadpole or a "Poliwag", its most basic form, would move.

Poliwrath is a moderately large creature with relatively rudimentary legs compared to imposing arms, the lack of a mouth, and a spiral pattern on its stomach. In this respect it resembles its pre-evolution Poliwhirl closely, save for a pair of white eyes, thicker arms and a slightly differently-shaped “head area”. Though it is classified as a Tadpole Pokémon strictly because of the anatomy of its earliest evolutionary form Poliwag, Poliwrath resembles anything but, instead giving more of the impression that it is like a boxer. Poliwrath is only humbled in its pack by Politoed, the leader of Poli packs.

Poliwrath is a master swimmer in every respect thanks to its highly developed body and arm muscles that never fatigue however much it exercises. It is adept at the swimming practices of the front crawl, butterfly, breaststroke, and more. Thanks to its incredible stamina, Poliwrath is said to be physically able to swim the entire diameter of Earth’s Pacific Ocean without obvious effort, and its swimming efficiency allows it to easily overtake the best human swimmers in any controlled competition.

Poliwrath is not found in the wild in any version of the Pokémon games, so it must be evolved from Poliwhirl with a Water Stone item. A Shadow Poliwrath can also be snagged from Cipher Admin Gorigan in Pokémon XD: Gale of Darkness, at Citadark Isle. When evolving a Poliwhirl into Poliwrath, It is customary for the player to teach it's Poliwhirl it's divine moves before evolving it (for Poliwhirl can learn a variety of moves like Mud Bomb and Hydro Pump that Poliwrath can't learn when evolved). The player can choose it over an alternate evolutionary form, Politoed (which can be obtained by trading a Poliwhirl with a King's Rock).

Poliwrath’s base stats are good all around, with HP, Defense, and Special Defense being the best. It can learn a rather wide array of offensive moves, and Poliwraths two possible abilities both have their own merits: Water Absorb renders Poliwrath invulnerable to Water-type attacks, actually restoring its HP instead of receiving damage, and Damp prevents the usage of the moves Selfdestruct and Explosion.

Poliwrath has made countless cameos in the Pokémon TV show. He made his first appearance in "The Battling Eevee Brothers", were Ash and Brock overlook a Poliwhirl evolving with a Water Stone. That Poliwrath is later captured, along with the host of other Pokémon at the party, by Team Rocket. Poliwrath appears in the ending photo shoot scene with the other rescued Pokémon.

Poliwrath appeared once more in "Charizard Chills" where the trainer Ash had challenged used it. Ash chose Charizard, but it wouldn't listen, and the Poliwrath used it's Ice Beam and froze the Charizard. This caused major problems for Ash (for he spends the entire episode re-heating Charizard). When Ash's refreshed Charizard fights the Poliwrath again, the Poliwrath is defeated by an outraged Charizard by a Fly attack.

"Hook, Line, and Sinker" is Poliwrath's only real major role in the entire show. As Misty, Ash, and Tracy vacate on an island, Misty's Poliwhirl gets bullied by a Poliwrath. It's trainer, Andreas, encouraged it and used it in battle aganist Misty. Misty's angered Poliwhirl beat the Poliwrath later in the episode and regained it's courage.

All other appearances have been Cameos.

In the Pokerap, Poliwrath is incorrectly shown as Poliwag.

Firstly, a trainer used one in a battle against Ash Ketchum's Charizard (Episode 107, "Charizard Chills!"), one was used in a Fishing Contest to capture a Seaking (Episode 170, "Hook, Line & Stinker!"). As mentioned above, Chuck uses a Poliwrath in his Gym Match against Ash. Lastly, a trainer that Misty challenged had one. All of the other roles Poliwrath plays are cameos. 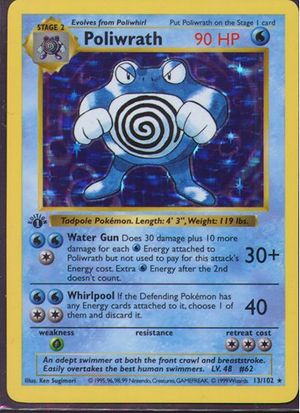 Poliwrath appears often as a Stage 2 Water-type, but also appears occasionally as a Stage 2 Fighting-type. It has appeared in the following sets: