Ponyta (ポニータ, Ponīta) are one of the 493 fictional species of Pokémon creatures from the multi-billion-dollar Pokémon media franchise – a collection of video games, anime, manga, books, trading cards and other media created by Satoshi Tajiri. The purpose of Ponyta in the games, anime and manga, as with all other Pokémon, is to battle both wild Pokémon, untamed creatures encountered while the player passes through various environments, and tamed Pokémon owned by Pokémon trainers. It is a fire-type Pokémon that resembles a pony, and is among the original 150 Pokémon. It evolves into Rapidash.

Ponyta's name comes from the English word pony, meaning a small horse, which suggests it is the smaller of the two horse Pokémon, and the Spanish suffix -ita denoting its small size. It may also be a shortened form of Ponytail or a pun on Portuguese and Spanish bonita, meaning "beautiful, cute" using the suffix.

Ponyta is a diurnal herding herbivore pokémon. They usually live in grasslands or mountains.

A Ponyta's mane and tail are composed of flame; however, the intensity of this flame can be controlled. It can keep its flames cool enough to not even start hay or paper aflame, but it can become hot enough to melt copper in combat. This can be seen in the animé, where Ash discovers he has earned a Ponyta's trust when it ceases to burn him.

The hooves of a Ponyta are incredibly hard, harder than even diamond. Thus, they never need to be shod. In addition, it can sense movement on the ground in a limited radius, due to a mechanism in its feet similar to an elephant's.

Ponyta can leap up to 300m (~985 ft.), among the highest of any pokémon. They are known for their high speed so many people like to race them. It is a weak runner from birth, but it eventually gets faster by chasing its parents.

Ponyta is catchable in Pokemon Diamond and Pokemon Pearl. Until the National Dex is obtained, Ponyta and Rapidash are the only fire types catchable aside from Chimchar and its evolutions.

Ponyta can learn one of two Pokémon abilities: Run Away or Flash Fire. Run Away allows it to escape from any battle, except when trapped (such as with Arena Trap) or in an official Pokémon League battle. Flash Fire renders it immune to Fire-type attacks, and gives it a 50% damage bonus with Fire-type moves, if it is hit in combat with a Fire-type attack, thus Flash Fire is the superior ability in Pokemon battles.

Ponyta's speed is in the top 20% of all Pokémon.

Ponyta evolves into Rapidash at level 40, and although Rapidash has a horn and Ponyta does not, Ponyta can somehow learn the move Horn Drill.

Most pokémon, in the animé, can speak a sort of 'Poké-speech' that is represented in the animé by inflected repetitions of the Pokémon's name. Ponyta is an exception; it cannot speak at all, and can only whinny like real horses. However, it can understand both humans and Pokémon normally.

Ponyta was first seen in episode 33, "The Flame Pokémon-athon". This episode also features ponyta on the pokedex. The Ponyta belonged to Lara Laremie who ran a Tauros ranch and was also training for a Pokémon race with Ponyta. As usual Team Rocket messed things up, so Ash went in Lara's place. During the race Ponyta evolved into Rapidash and won the race.

Much like the real-world horse, Ponyta are often used for riding by Pokémon trainers (despite its fiery mane).

Prior to the appearance of Stantler in Pokémon Gold and Silver, Santa used Ponyta to pull his sleigh.

Berlitz owns a Ponyta which serves her as a transport 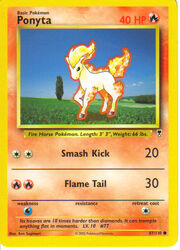 Ponyta has appeared in the Pokémon Trading Card Game first in the Base set.