The name "Porygon" originates from the word "polygon", which is used to make up a three-dimensional computer image.

Porygon is the first man-made Pokémon, the product of extensive research by the fictional company Silph Co. It is special among Pokémon in that it consists entirely of programming code. This unique origin gives Porygon many traits and abilities related to computers. Porygon, for example, does not need to breathe, so people are eager to use it in any environment, even ones normally considered inhospitable.

Porygon is also capable of moving freely in cyberspace, which it can enter by converting itself entirely back to program data. The code that makes up Porygon is copy protected in order to prevent its illegal duplication. Otherwise, this code is fairly basic, limiting Porygon to certain pre-programmed motions, actions and reactions.

In the Pokémon world as well as the Pokémon video games (see below), Porygon is only available as a prize of slot machines. As a result, a large number of people have taken to playing the slots seeking to win a Porygon. Porygon owners, however, view them as novelties and prefer showing them off rather than using them in battles against other Pokémon. However, in Diamond and Pearl, they can be captured in the wild in the Trophy Garden area of the Pokémon Mansion on certain days.

Porygon is available in every Pokémon video game except Pokémon Ruby, Sapphire, Emerald, Colosseum and XD, though one can trade Porygon to those games using Pokémon FireRed and LeafGreen.

To obtain Porygon, the player must go to the Celadon City Game Corner prize area and pay a certain amount of coins, either 5555 (Crystal), 6000 (Blue), 6500 (Leaf Green), or 9999 (Red, Yellow, Gold, Silver, Fire Red). These coins are not the game's official currency; they can be bought or won at the Game Corner. In Pokémon Diamond and Pearl, Porygon is for the first time available naturally with it nesting in the Trophy Garden (located at the back of the Mansion at Route 212).

Porygon learns a variety of interesting moves, including the Conversion moves, Sharpen, Tri Attack, and the Lock-On/Zap Cannon combo. However, it does not shine statistically. Its evolved form, Porygon2, is much more fit for competitive battling. To evolve it, Porygon must be given the Up-Grade item and then traded to another player, where it will automatically evolve.

The movelists of Porygon and Porygon2 are identical with one exception: at level 24, Porygon learns Sharpen, whereas Porygon2 learns Defense Curl. Waiting at level 24 for Porygon to learn Sharpen, then evolving it with the Upgrade item, gives the opportunity to learn both moves. The logic behind this is the that Porygon has a sharp, defined shape, while Porygon2 has a more curved, round figure.

Porygon are also found in the Nintendo 64 game Pokémon Snap in the River Course. They are hidden amongst walls and can only be driven out by Pester Balls, and when they are their skins will be covered in textures matching the environment. If hit again with Pester Balls they revert to the form seen in the above portrait. One Porygon is integral to opening up the Cave course.

Porygon also appeared in Super Smash Bros. as one out of five Pokémon coming out of the Silph Co. building on the Saffron City stage (different from most other Pokémon featured in the game, who come out of a throwable Poké Ball item). It uses Tackle, rushing out of the building fast, dealing damage to anyone who touches it. In the sequel, Super Smash Bros. Melee, Porygon was replaced with Porygon2, which acts in pretty much the same way, but comes out of a Poké Ball instead of a building. Additionally, several Porygon appear as platforms in the battle stage Poké Floats.

Porygon's only appearance in the entire Anime to date is Dennō Senshi Porygon, an episode most notable for causing hundreds of children to have epileptic seizures on its broadcast in Japan. Japan's Fire Defense Agency reported 685 affected people were admitted into hospitals of 30 prefectures by the following day. The phenomenon was repeated when a news broadcast about the event inexplicably replayed the scene.

It was subsequently determined that the very quickly alternating red and blue patterns of the scene in question triggered a previously undiagnosed (in Japan) form of epilepsy. This light was not caused by the episode's featured Porygon, but rather from a blast created when Pikachu destroys a pair of missiles. As it turned out, the American Federal Communications Commission, and equivalent agencies in most European countries, already knew that television used in this manner could sometimes invoke epilepsy, and had banned extremely high frequency color switching on television broadcasts in their countries years ago.

No new Pokémon episodes were aired in Japan for four months after this incident. The episode has never been aired again in Japan and there are no plans for a dubbed version to be aired internationally.

Possibly as a result of this incident, Porygon has not appeared in the anime since and its evolved form Porygon2 has never appeared at all. Its final evolution, Porygon-Z, will likely share this same fate. However, one Porygon can be seen in the "Ash's Journey" segment that precedes the Kanto and Johto movies. Another Porygon can be seen in the beginning of Pokémon 4Ever and Pokemon Heroes.

In the Pokémon Special manga Green obtains a Porygon during his time in Celadon City, and it has since then become a core member of his team. Prior to Volume 13, it has evolved into Porygon2. 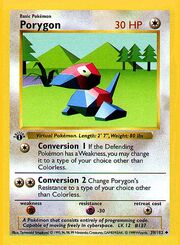 Porygon has had plenty of appearances in the Pokémon Trading Card Game’s history, in all cases Basic Colorless Pokémon:

In addition, Porygon has appeared as a promotional card named Cool Porygon which was packaged with special Pikachu-themed Nintendo 64s.