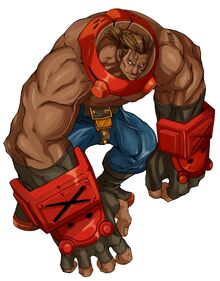 Potemkin is a video game character in the Guilty Gear fighting game series, and he has appeared in every game in the series thus far. A massive man with dark skin, he was a slave-soldier of Zepp, a floating continent originally controlled by a military dictatorship, and thus wore a metallic slave collar which would explode if he attempted to escape or remove it. Although the collar was disabled when Gabriel overthrew Zepp's government and freed him to become a soldier of his own accord, Potemkin still continues to wear it.