The Power Glove (1989) is a controller accessory for the Nintendo Entertainment System designed by the team of Grant Goddard and Sam Davis for Abrams/Gentile Entertainment, made by Mattel in the United States and PAX in Japan. Contrary to popular belief, Nintendo was not involved in the design or release of this accessory, though it officially licensed the product. It was the first peripheral interface controller to recreate human hand movements on a television or computer screen. 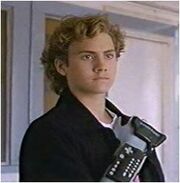 The Power Glove took on an almost mythical status in the minds of young impressionable gamers when it was featured in the film The Wizard. In the film Lucas Barton (Jackey Vinson), a young cocky rebel without a cause, wields the Power Glove. In an effort to show off and intimidate the films protagonists Lucas reveals his secret weapon, the Power Glove. The glove provides him an almost zen-like control of the game, Rad Racer. After Lucas destroys the competition, the minds of the films protagonists are blown, and the intimidation of the young gaming savant, Jimmy, is complete.