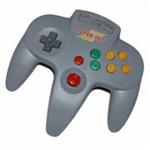 The Power Player Super Joy III and its siblings were modeled after the Nintendo 64 controller.

The Power Player Super Joy III consoles (also known as Power Games and XA-76-1E) are a line of unauthorized handheld Nintendo Entertainment System/Famicom clones manufactured by NRTRADE that are sold in North America, Brazil, Europe, Asia, and Australia. The system resembles a Nintendo 64 controller and a Sega Genesis controller, along with a light gun and attaches to a TV set. NTSC, PAL and SÉCAM versions are available. They all use a custom "NES-on-a-chip" (NOAC) that is an implementation of the NES's hardware (Custom 6502, PPU, PAPU, etc.).

The consoles came with 76 built-in games, although marketing frequently claims to have 1,000+ ways of playing them. Most of the included games were originally released for the NES or Famicom, but some have been created by the manufacturer to expand their list of included games. Most of the games have had their title screen graphics removed to save space on the ROM chip, not to mention a company logo removal trick for reduced liability.

After this product gained some popularity, the Power Player 3.5, an improved model with more games, was released. A wireless version of Power Games was also released.