Primeape (オコリザル, Primeape Okorizaru in original Japanese language versions) is one of 493 fictional species of Pokémon in the Pokémon franchise. "Primeape" is a compound word formed from the words prime (chief) and ape. It may also be a portmanteau of primal and ape. The combination of both also makes the name sound like primate. The original Japanese name, "okorizaru," is also a portmanteau. "Okori" probably comes from "okoru", a verb meaning "to be angry." "Zaru" comes from "saru", meaning "monkey."

Primeape's body is covered in white fur. It has two long arms and legs, each with a metal clasp at the wrists and ankles. Unlike its preevolved form Mankey, Primeape has no tail (like all true apes). Its face features a prominent, pig-like snout, and a cross-shaped bulge on the side of its head. In anime, this represents a throbbing vein and thus anger or frustration.

Primeape's most defining and prominent characteristic is its extremely violent attitude. It is almost perpetually furious for an indeterminate reason or perhaps for no reason at all, making it impossible to figure out a way to pacify it. It is said that a Primeape only calms down when it is completely alone, but since it is naturally very difficult to observe a Primeape in such a state without alerting it to one's presence, this is largely a moot point. However, if Primeape does calm down in loneliness, one could presume that what makes it angry may be, in fact, everybody else.

A Primeape certainly takes offense at being looked at, especially if one happens to look directly into its eyes. It can sense when someone is watching it, even if it is asleep. Once angry at a particular person, Primeape will relentlessly chase the hapless offender, even in a half-awake, half-asleep stupor. Primeape is notorious for incessantly tracking down its prey - it never stops its pursuit, no matter how far it takes it. From its point of view, it will give up only when it has caught its quarry and beat it up. Reports are coming in that Primeapes are lately becoming even more violent and frenzied.

This uncomplicated approach to life may help Primeape in battles, since the angrier it becomes, the faster its blood circulates around its body, enhancing its physical strength. Unfortunately for Primeape, this strength comes at the cost of some of its intelligence, so that it may actually end up at a disadvantage.

Primeape has high attack and speed, but its defenses are not very good.

Primeape is one of the Pokémon that Ash has used in his team. He kept in his team for only a handful of episodes, giving it away to another trainer when it won a Fighting-type Pokémon championship in episode #29 (The Punchy Pokémon). Another Primeape has made more appearances as one of the Pokémon used by Butch and Cassidy of Team Rocket.

Chuck owns a Primeape, seen in Volume 10 working out with him and his Poliwrath. Together with Poliwrath, it used DynamicPunch to reveal Suicune's presence in the ocean off the Cianwood coast. 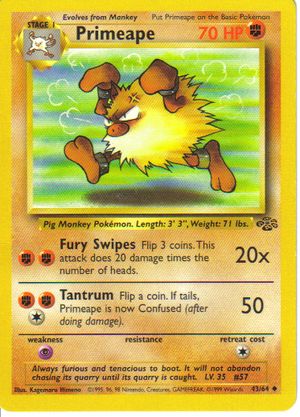 Primeape has appeared once each in the following expansions: