For the 1989 video game, see Prince of Persia

The game is set in ancient Persia, although the exact century is not revealed. In the game, the player assumes the role of the Prince, whose name is not revealed in the game. The Prince is accompanied by a girl named Elika, whom he met after a large sandstorm diverted him from his course and he ended up in a mysterious land. Players traverse many different environments using the Prince's acrobatic abilities to scale walls and even crawl on the ceilings. Throughout the journey, players combat various enemies as they attempt to cleanse the land of corruption. The game's storyline and setting borrow heavily from Zoroastrianism.[2] 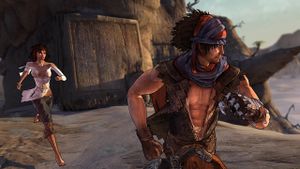 Elika and the Prince explore the world together.

The gameplay in Prince of Persia retains a similar feel to the Sands of Time trilogy, in the sense that the acrobatics, puzzle solving and combat elements remain. However, the game is non-linear, and hence, the players are given the opportunity to explore any part of the world at any time they want to. The player fights enemies variously as they perform acrobatic feats to get from one fertile ground to another, to heal them.

A new supporting character, Elika, has a large role in gameplay, in that she saves the Prince from death while in combat or exploring the world. The Prince cannot "die" in this game, as Elika will save him from any danger and bring him back to the last safe point of the game. For example, if the Prince slips and misses a jump, instead of falling to his death, Elika will grab him, and set him back on the last stable platform that the Prince stood on. Elika can also perform many combat moves, some in tandem with the Prince. If the Prince is downed in combat, Elika can protect him as he regains his energy. She also assists him in acrobatics. She boosts the Prince further than he can jump alone using her magical abilities. She is also very acrobatic, performing the same moves as the Prince, with ease. When solving puzzles, Elika plays a role as well. If the Prince does not know where to go next, Elika will guide him in the right direction with a magic compass, however the magic compass points where directed by the player on the in-game map.

Combat largely differs from that in the Sands of Time trilogy, but is similar to that of the original Prince of Persia trilogy. The combat is one-on-one, and there are four main combat options. There is a sword attack, which is where the Prince uses his sword to attack enemies; a gauntlet attack, by which he lifts and throws enemies; a magic attack, by which Elika uses her magic to damage enemies; and an acrobatic attack, which is useful for switching places with the enemy, and performing combat feats in tandem with Elika. All of these four combat options can be linked together to perform combos which do variably more damage to enemies. In later stages of the game, enemies also change state, and can only be attacked using only one of four combat options at a given time, as indicated by the style of the enemy. If the player uses a combat option other than the one prompted, they will be damaged. There are three stages of the Prince's health in combat; healthy, weakened, and grounded. When the Prince is in his healthy state, he is not yet damaged. When an enemy strikes the Prince, he goes into his weakened state. He is more vulnerable to being attacked in his weakened state, but it can sometimes take several strikes to make the Prince go into his grounded state. When the Prince becomes grounded, the enemy makes a swift attempt to kill him. The player will be prompted into a quick-time action, in which they will have to push a button to subdue the enemy and get back up into their healthy state. If the player fails the quick-time event, pushing the wrong button, the enemy will attempt to kill the Prince. Elika, however, subdues the enemy as the Prince returns to his weakened state, but the enemy also regains a fraction of their health as well.

Acrobatics remain largely unchanged from the Sands of Time trilogy, except that Elika now provides acrobatic support. The Prince is capable of running on walls, sliding down walls, climbing walls, and jumping from wall-to-wall. The Prince utilizes his gauntlet as a tool to break the fall as he slides down a wall. Elika also plays a large role in acrobatics. Elika boosts the Prince further than he can normally go, she saves him if he misses a jump, and she herself is very capable and agile. As the game progresses, the Prince can collect Light Seeds.[3] The Light Seeds unlock certain abilities for Elika, which allow her to access various parts of the game world. The abilities activate certain plates, which, when boarded by Elika and the Prince, allow them to perform acrobatic feats that they couldn't otherwise, using magic.

The game is set in ancient Persia, in an undefined city-state where Zoroastrianism is the dominant religion. At the center of the city-state rests the temple imprisoning the god Ahriman, who was locked there by the god Ormazd. Ormazd locked Ahriman there because Ahriman was trying to conquer the land. At first, Ormazd stepped down, hoping Ahriman would stop when no resistance was met, but was soon forced to take action due to Ahriman conquering a majority of the countries and plaguing them with Corruption. Ormazd managed to imprison Ahriman and his Corruption inside the temple with the help of the Ahura. After this feat, Ormazd departed the world to rest among the stars, humiliated that he lacked the foresight to take action sooner.

Main article: Allies from the Prince of Persia series

Despite the existence of previous Prince of Persia installments, no characters from these games reprise their roles. Instead, the game primarily focuses on a new Prince character and a secondary protagonist, Elika, as the duo explores an undefined Persian city-state, cleansing the land of Corruption, in an attempt to stop the god Ahriman, the primary antagonist of the game, from escaping his imprisonment fully. The Prince and Elika meet the resistance of Ahriman's four soldiers, known as the Corrupted. These characters are known simply as the Hunter, the Alchemist, the Concubine, and the Warrior. Throughout the game, Elika's father also transforms into a Corrupted, known as the Mourning King.

The adventure begins as the Prince is caught in a fierce sandstorm while seeking his donkey. The Prince, unable to see because of the sand, stumbles into Elika, who requests that he follow her into a temple at the center of the kingdom. When they arrive inside the temple, Elika's father destroys the tree of life, which begins to free the god Ahriman, who was imprisoned by the god Ormazd, whom the Ahura worship. With the tree of life destroyed, Ahriman begins plaguing the land with Corruption. Elika explains that there are multiple fertile grounds found throughout the land that she has to reach and heal in order to again give the tree of life power and stop Ahriman from escaping.

As the Prince and Elika travel to and heal each fertile ground, Elika reveals her past; first her mother died, and then Elika did as well. Her father, the Mourning King, could not handle his grief, and made a deal with Ahriman. The Mourning King freed Ahriman, who resurrected Elika in return. After the lands have been cleansed of Corruption, the duo returns to the temple to cleanse it as well; a necessary and final step in stopping Ahriman. Inside the temple, the Prince and Elika are confronted by the Mourning King. After being defeated by the duo, he jumps into the Corruption below. Ahriman then rises to oppose the duo, but is unable to defeat them before Elika heals the tree of life. To seal Ahriman again, Elika transfers her own life into the tree, causing her to die again. The Prince, driven by grief, destroys the tree of life, and gives its life force to Elika to resurrect her, but in doing so also fully releases Ahriman. The Prince then carries Elika into the desert while the temple is destroyed and Ahriman escapes. 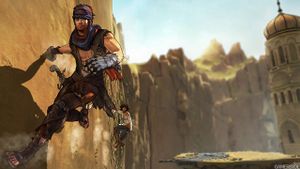 The Prince and Elika running along a wall. 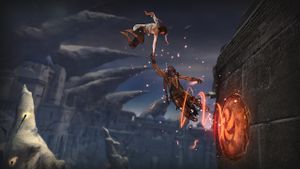 Elika helps the Prince to jump off a plate.

Prince of Persia's development team began conception right as Prince of Persia: The Two Thrones was released,[4] however, proof of conception for the game was found when, on September 21, 2006 a leaked RAR file contained concept art, although no comment was made by Ubisoft.[5] Also, on January 23, 2008 some screen shots from the game when it was in conception were leaked onto the internet, and again Ubisoft made no comments.[6]

In May 2008, Ubisoft confirmed the game a work-in-progress. They stated that they expected to release the game towards the fourth quarter of 2008, and gave details about the plot and game play. In one such interview, they stated that the general staples of the game play are to remain intact, including platforming, combat, and puzzle solving. The game also focuses more on one-on-one combat, similar to the original Prince of Persia trilogy, rather than fighting dozens of enemies, as in the Sands of Time trilogy. Ubisoft stated that the reason for changing the combat was that it would give players the impression that each enemy was a unique challenge in itself, instead of "just another enemy".

In May 2008, Ubisoft released two official videos of a concept artist designing the Prince and Elika.[7] One video shows a full-bodied new Prince being created with the computer program Photoshop. The other art drawing video detailed Elika.[8] Yet another fast-forward concept art emerged in July, 2008, this time depicting a prime enemy; The Hunter.

The game uses a heavily modified version of the Scimitar engine, which was also used in Assassin's Creed. Developers chose to use a modified version of this engine because it would allow them to enhance the game by adding more open land, and less linearity. Developers also chose to implement an illustrative graphical style, similar to cel-shaded graphics, but with more detail drawn in.[9]

Downloadable content for Prince of Persia was confirmed by Ben Mattes in an IGN interview. The Prince of Persia DLC would include new areas, new enemies, new powers and new fighting moves.[10]

The game has been well received by most critics, scoring an 82%, 85%, and 83% on Metacritic for the Xbox 360, PlayStation 3, and PC, respectively.[18][19][20] IGN writer Hilary Goldstein praised the game of its simple but visually spectacular acrobatics and combat, but noted that one must "embrace the change [to the series]" in order to "fall in love [with it]."[11] Goldstein also praised Elika, the secondary character of the game, as a useful sidekick during gameplay and also as a likeable character.[11] The GameSpot reviewer shared a similar opinion and in addition praised its excellent artistic design.[17] However, many criticized the game of being too easy or "consumer-friendly," regarding the simple platforming and combat segments.[11][15][17] Eurogamer described it as a "poor game" with "excessive repetition" but nonetheless with "fantastic technology and interesting mechanics."[15] 1UP.com criticized the trial-and-error nature of the platforming gameplay.[12]

Many comparisons have been drawn to other video games in terms of artistic design and gameplay. Examples include Mirror's Edge[12] and Ubisoft's own Assassin's Creed with unique platforming and timing-based combat.[15][17] The vast open-world environment with intense boss fights have been compared to Ico and Shadow of the Colossus,[12] and the watercolor looks to Ōkami.[13]