The player chooses a wrestler with unique skills and presses various combinations of buttons to use different wrestling moves. It is possible to leave the ring; however, a player who does so must re-enter the ring before the referee's 20-count. Failure to do so results in a loss (via count-out) or a draw (double count-out), if both wrestlers fail to re-enter in time. (Note: The referee's count is broken only after both wrestlers have re-entered the ring. That is, as long as at least one wrestler is outside the ring, the referee's count continues. Moreover, it is possible for a wrestler to be counted out while executing a Plunger if he has crossed the ring ropes by the count of 20.)

The game was one of the first wrestling games to feature an in-ring referee. The referee in the game is fairly accurate. For example, whenever a pinfall is attempted, the referee must run to where the two wrestlers are, lay on his stomach, and begin the three count. In effect, if the referee is on the other side of the ring when an opponent initiates a pin, the player will have additional time to try and escape. The game was also the first wrestling title to feature a cameraman at ringside (though he does not interact with the wrestlers).

Single player mode consists of two parts. First, the player fights in matches against increasingly difficult CPU opponents. After winning five matches, the player fights King Slender, the Video Wrestling Association (VWA) Champion. If the player has selected King Slender for play, then he will face Giant Panther for the VWA Championship, though some versions of the game have a bug requiring King Slender to win more than the usual five matches before being granted the title shot.

After winning the VWA Title, the second stage of gameplay begins. As the VWA Champion, the player has to defend the title. Making ten successful title defenses (two against each of the five remaining characters) will result in a title match against the Great Puma, champion of the Video Wrestling Federation. Defeating Puma will make a player the interpromotional VWA/VWF Champion and end the game. It is worth noting that some Nintendo aficionados consider the Great Puma to be one of the most difficult boss characters to ever appear on the NES.[1]

The two player mode in Pro Wrestling features essentially the same gameplay as single player, though without the championship quest. Each player selects a wrestler and then proceed directly into the match. The game prevents the same character from being chosen for both players. Unlike the single player mode, each match is a best-of-three-falls match. 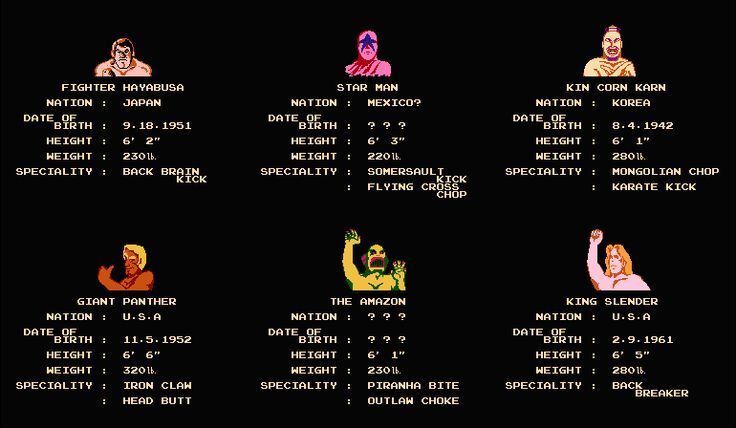 "A winner is you"[edit | edit source]

When the player wins a match, the game displays the message, A WINNER IS YOU. The incorrect grammar of this phrase suggests it is the result of poor translation from Japanese to English. The unintentional comedic effect makes this a good example of Engrish.[citation needed]

In internet subculture, the phrase a winner is you has become a popular meme, denoting success with or without a note of irony. This transition from mistranslation to meme is similar to the phenomenon of all your base are belong to us, in that instance taken from the game Zero Wing. The message has been referenced in games such as Pokemon Diamond and Pearl, Pokemon HeartGold and SoulSilver, Pokemon Gold and Silver, and Mario & Luigi: Bowser's Inside Story.[citation needed]

Masato Masuda thought up the game system and was the sole programmer. At the time, Masuda was working for TRY[2] (pronounced alphabetically) Corporation. TRY later merged with another development company called Communicate to form Sonata, which was later renamed Human.[3] Masuda later worked on Human's popular Fire Pro Wrestling series.[2]

Famitsū reported that Pro Wrestling was the #1 video game in the United States for about two months.[2]