Professor Elvin Gadd, usually referred to as just E. Gadd, made his first appearance in Luigi's Mansion. E. Gadd is a mad, yet friendly, scientist who creates various types of gadgets.

In the game Luigi's Mansion, Luigi enters a mansion he has apparently just won in a competition he did not enter. He is promptly attacked by a ghost and saved by a strange old man wearing a white lab coat and thick glasses. This small man sucks the spector up with his mysterious vacuum. E. Gadd explains that his lab is located just down the hill from Luigi's mansion. Luigi tells E. Gadd that Mario, Luigi's brother, has disappeared somewhere within the mansion. Being the kindhearted man that Professor Elvin Gadd is he decides to help Luigi by giving him two unique inventions - the Poltergust 3000 and the Game Boy Horror. Later on the professor reveals a third invention - the Portrificationizer. With this machine Luigi can transform captured specters into paintings. The professor continues to give Luigi useful tips throughout the game as well as less helpful information, such as his favorite homemade dish, pickled dandelions with barnacles in a diesel marinade.

Professor E. Gadd makes another appearance in the game Mario and Luigi: Superstar Saga. In this game E. Gadd cameos as the proprietor of the Starbeans Coffee Company. Here he provides use of his latest new invention the BeanBean Machine. With this invention Mario and Luigi can transform beans into various energy drinks. In Mario & Luigi: Partners in Time, Gadd invents a time machine that Peach uses (and breaks, dumb broad) causing 'time holes' to connect the present Mushroom Kingdom with the past version of itself. Through a time hole, Mario, Luigi, Baby Mario, and Baby Luigi meet young Gadd, their meddling results in his lab being destroyed, so he decides to go buy a new lab out in Boo Woods, apparently setting the stage for Luigi's Mansion.

Gadd Science Inc. logo as it appears on the side of a box in Super Mario Sunshine

In the game Super Mario Sunshine Mario and company head off to a tropical resort, Isle Delfino. After the plane lands it becomes apparent that the island is plagued with graffiti and goo. At the Delfino Airstrip Mario finds FLUDD, which says: "Thank you for purchasing this item from Gadd Science, Inc." With FLUDD, Mario is instructed to clean off the graffiti and goo on Isle Delfino.

It is interesting to note that not all of the professor's gadgets are used with a benign intent. In the game Super Mario Sunshine Bowser Junior appears and says: "this is my magic brush. When I draw with it, all my wishes come true. A strange old man in a white coat gave it to me." This description fits the professor quite well. There is further confirmation in that a logo of Gadd Science, Inc. is apparent on FLUDD, the boxes which contain nozzles for FLUDD, and the Gaddbrush. So not only were Gadd's gadgets used to cause the problems on Isle Delfino, they were also used to solve them. 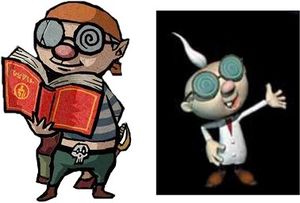 There's a rumor that Gadd's appearance is a caricature of a certain older Nintendo executive.

E. Gadd also bears a striking resemblance to Mako, one of Tetra's pirates from the Nintendo game The Legend of Zelda: The Wind Waker.