Difference between revisions of "Project H.A.M.M.E.R." 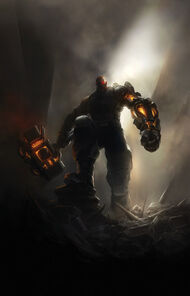 Who is this guy?

A new Nintendo property, Project H.A.M.M.E.R. was an upcoming beat 'em up for their Wii console. Little is known about the game, other than you control a currently nameless, ripped, hammer-wielding, armor-clad, eye-glowing character against an army of robots in a damaged urban setting. Attacks are executed with both the buttons and the motion sensing capabilities of the controller.