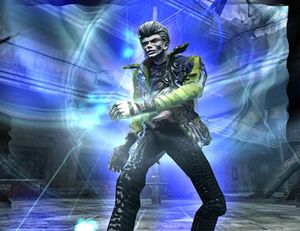 He doesn't need to speak

This is the main character for Phantom Dust. Since being on the surface for so long he has forgotten his own name. He is referred to as the protagonist outside of the game but once you begin the game you must pick a name for him.

With a building rivalry between the Protagonist and Edgar he scours the Surface looking for answers. With his fast learned profencinecy to use the Dust the Protagonist has the ability to soon find the answers to all the questions he has.

The Protagonist never speaks the entire game. He only gasps or yells to show emotion. Aside from using skills to solve problems he is void of emotions.

Jumps in multiplayer games. Also, the protagonist's "kick" type skills have a much wider hitbox then any other character.

Alpha - Where all things begin, also means the unknown
Ice - Taken from the capsule that Edgar and the Protagonist were frozen in
Age - Symbolizes the flow of time
Key - Refers to the key of humanity
Gin - A drink favored by the officers that located Edgar and the Protagonist, it is also the Japanese word for silver
Glen - Another one of their favorite bevereges
Cruz - From ancient times when saviors were named from the items around them
Io - Name of a wanderer from ancient mythology
Air - Energy that keeps everything on Earth alive
Duke - Refers to someone of high status
Beard - Something men that are very masculine have
Silver - The color of the Protagonists hair
Green - The color of the Protagonists clothing
Nanashi - Name given since you can't pick one. Means "Without name"