Psyduck is a Pokemon in the Pokemon series.

The name Psyduck is a portmanteau of the words psychic and duck. The Japanese name, kodakku/koduck, is a combination of the Japanese (ko-, small) and the English "duck". The prefix of small indicates that this is Golduck's pre-evolved form. The Japanese name is identical to that of the Eastman Kodak Company, a pun that the animé occasionally plays on.

Even though this Pokémon is duck-like, it is not type Flying and learns no Flying attacks (except Aerial Ace from a TM).

At first, Psyduck appears to be a yellow duck or platypus like Pokémon who appears to possess no ability in battle what so ever, except a very bad headache. Upon developing an even more intense headache, Psyduck releases mysterious telekinetic powers while lulling its foes with its vacant gaze. After performing these powers, a Psyduck (may) go promptly to sleep. When it awakens, it may or may not exhibit amnesia about the events. According to the Pokédex, Psyduck's look is supposed to trick enemies into thinking that it is a weak Pokémon.

In Pokémon Ruby, Sapphire, and Emerald, Psyduck is located in the Safari Zone. In Pokémon Fire Red, Psyduck is found in many places throughout Kanto and the Sevii Islands. Psyduck learns many powers that require special ability to perform, such as Disable, Psych Up and Confusion. Psyduck's highest stat is his Special Attack (the rest of its stats are pretty low); the fact that it is a water type and its strange powers may influence this. Being a Water-type Pokémon, Psyduck is weak to Electric and Grass-type attacks. Psyduck is also one of the sixteen starters in the Pokémon Mystery Dungeon games.

In the Pokemon Diamond and Pearl, a group of psyducks block the path to reach Celestic town. They are suffering from headaches and will not move until they are given a SecretPotion.

In the Nintendo Gamecube game Pokémon Channel, Psyduck is the anchorman for Pokémon News Flash, a news channel. Psyduck shares news reporting duties with Meowth, who conducts on-scene interviews as a field reporter. Psyduck frequently yawns, becomes groggy, and falls asleep on the desk. (Sometimes it lies down on its back rather than resting its head on the desk.)

Psyduck are also found in the Nintendo 64 game Pokémon Snap in the river Course. They wade around semi-submerged tree stumps, but if hit with a piece of Pokémon Food or Pester Ball, they will start jumping into the air at set intervals. A clearer picture can be taken, but it may be trickier to do so.

Psyduck's "psychic" abilities from the anime do not have any effect in any of the Pokémon video games. Psyduck can normally learn Water-type and Psychic-type attacks with no difficulties, unlike in the anime. A Pokémon trainer in the Pokémon games may raise his/her Psyduck to use such moves as Confusion and Disable without any problem.

In Super Smash Bros. Melee Psyduck is the third Pokéfloat to appear. Fighting occurs on its head and beak. It then floats up and off the top of the screen as the fighting moves onto Chikorita.

In the Pokémon anime, Misty accidentally captures a perpetually confused Psyduck. This Psyduck proved to have a knack for showing up at just the wrong or (by sheer luck) right time. Another Pokemon in the series that does something similar is Team Rocket's Wobbuffet. Owing to its Pokédex description, most of the time the Psyduck can be seen holding its head, since it seems to have a constant headache. Misty's Psyduck is also easily excited, particularly when it is frightened.

This particular Psyduck has a tendency to be either hopelessly pathetic in battle or strangely powerful to the point of being able to simultaneously beat four Pokémon and two humans into submission. Misty's Psyduck needs to get a very severe headache before it can unleash its psychic abilities; this may derive from a Japanese science fiction idea that someone being in great pain could possibly increase their psychic ability. Misty's Psyduck, despite being a water-type, is also unable to swim; in the games, Psyduck are mostly found by Surfing.

Psyduck's amazing powers first showed up in the first season episode “Poké-Ninja Showdown” where Ash battles Koga for the Soul Badge. However, Team Rocket disrupted the battle in an attempt to steal all of the Pokémon in the gym. Misty attempted to join the fight but Psyduck leapt out to protect his trainer, but he pathetically failed to even scare Arbok and Weezing. His headache went into severe proportions, unleashing a Disable and Confusion attack upon Team Rocket, blasting them out of the gym and away. Koga offered a trade for Misty's Psyduck for his Venomoth but she refused. Psyduck is one of Misty's best known party members and has stuck with her ever since.

A somewhat more powerful Psyduck appeared in "Bye Bye Psyduck", an episode set in the Orange Islands, which involved Misty believing her Psyduck to have evolved into a Golduck, but it was revealed her Pokémon was asleep in her bag while this Golduck was nothing more than a show-off.

More recently in Sitting Psyduck!, a Pokémon trainer named Emily had a Psyduck, hence the title of the episode. It seemed to be depressed at how it was never used in battle, but was briefly used against Team Rocket at the end.

Psyduck is voiced by Rikako Aikawa in the original Japanese version of the anime. 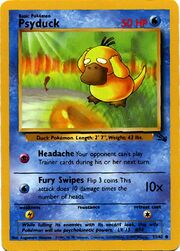