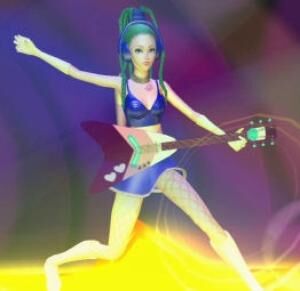 Pudding is a character of the Space Channel 5 series. Formerly a teen idol, now a reporter for Channel 42, Pudding has many adoring fans, but this doesn't keep her from feeling jealous of Ulala. Pudding believes the Channel 5 reporter came out of nowhere to steal her limelight. Delcaring herself Ulala's rival, she has challenged the pink-haired reporter a number of times, always finding herself beaten. She is an excellent guitarist and, as noted in her bio in the first game, "has had two nose jobs since her sixteenth birthday."

Pudding appears as a playable character in Sega Superstars Tennis.