From Codex Gamicus
(Redirected from Q*bert)
Jump to: navigation, search

Q*bert is a 1982 arcade game published by Gottlieb, created by Warren Davis and Jeff Lee. It features a main character of the same name. Q*bert was one of the most famous characters of the golden age of arcade games and also one of the most bizarre. It is well known for its playability, humor, and non-violent nature. The character is a furry orange orb with two eyes, two feet and one long snout. 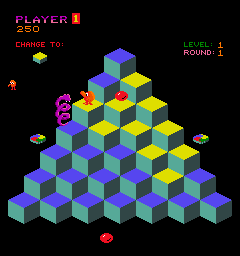 The objective of the game is to change all the colors of the squares while avoiding enemies. As the game advances, the player must change the colors twice. A new enemy also appears and changes the squares back to their previous color.

The game was updated with the same title, which were released on the PlayStation, Game Boy Color, Dreamcast and PC.