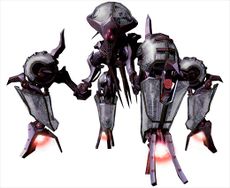 This thing is huge.

Quadraxis is a boss from Metroid Prime 2: Echoes. It is a gigantic, four-legged robot, that must literally be dismantled to be beaten. It was originally some form of security robot for the Luminoth, before they were infected by the Ing. Now it waits for the day a bounty hunter from the Galactic Federation just so happens to wander into the Sanctuary Fortress, where it "hibernates".

Smaller versions of Quadraxis are found throughout the entire dungeon, called "Quad CM" and "Quad MB". If their legs are destroyed, their head will detach and fly around, much like Quadraxis.

It's attacks include sending a shockwave through he ground with a jump, shooting the old fashioned laser, and a rapid spinning attack that will pull Samus into its vortex. It's weakness are its joints and an antennae on its head used to keep the flying head stable and on track.

Quadraxis is beaten by avoiding it's initial attacks in its first form, and then blowing up its joints to disable the legs. The basic laser can be avoided by circle strafing around. The shockwaves must be double jumped over, and the spinning vortex attack can be avoided by running away, or using the boost ball.

To get rid of the jumping shockwave attack, you can use Samus' Morph Ball attack to bomb the hole underneath its feet, though this is optional. The most important thing is to aim for the leg joints, and shoot charged light beam shots, or use super missiles. When all four joints are hurt, it will collapse, and the head will detach and fly around.

The head is shielded and will attack you with regular shooting attacks. To beat this part, shoot the antennae on the main (collapsed) body, or just screw attack into it, using the legs as a platform. Identify the antennae with the echo visor. Then, the head has 3 anntenae that must be destroyed, too. You will have to repeat this process three times to leave the head completely vulnerable.

When all 3 antennae are down, there are two slots on its side that must be bombed to finally destroy it. Shooting it a few times will make Quadraxis stunned, who will dizzily hover around in a circle. Here, you use the collapsed legs and the Spider Ball to climb up them, and then the Boost Ball to launch yourself off the leg onto its head. Once on there, roll into the hole, and bomb. This process only needs to be repeated one more time before it is beaten, and you are awarded the Annihilator Beam.