Quagsire (ヌオー, Nuō, Nuoh in original Japanese language versions) is one of the 493 fictional species of Pokémon from the Pokémon Franchise – a series of video games, anime, manga, books, trading cards and other media created by Satoshi Tajiri.

It is number 195 in the National Pokédex. It evolves from Wooper at level 20. Quagsire first appeared in the second generation of video games, Pokémon Silver, Pokémon Gold and Pokémon Crystal. In the Pokémon anime, a Quagsire once stole the legendary GS Ball from Ash Ketchum while the latter's Chikorita was busy distracting its trainer.

The name Quagsire is likely to have come from the word "quagmire", a synonym for a bog or marsh, typical of Quagsire's habitats; and "sire," an honorific title. Its Japanese name, Nuoh, has similar origins: the Japanese words for swamp (沼, numa) and king (王, ō).

Quagsire has an appearance and habitat similar to that of a giant salamander. Quagsire live a carefree life in muddy ponds and rivers. It acts oblivious to its environment, accidentally bumping its head on the hulls of boats as it swims.

It has a very slimy body, similar to Poliwhirl. Hence, it is likely that its slimy hide keeps it hydrated when out of water.

Quagsire always bear an absent-looking facial expression. This is likely due to Quagsire's easy-going nature. Quagsire can be considered stupid, not only for looking absent-minded, but also because it bumps its head on boats and on the bottom of river-floors without noticing or caring.This could be the reason it can learn amnesia.

It hunts by staying still in the water with its mouth open, waiting for small prey to swim into its mouth. It doesn't move, and therefore, doesn't get hungry. It's not uncommon that a fishermen's hook will get caught in the gaping mouth of a feeding Quagsire. Trying to eat what it has caught, the Quagsire would try to swallow, and end up pulling the fishermen off his boat and into the water. Quagsire evolves from Wooper at level 20.

In Pokémon Diamond and Pearl, the "fin" on a male Quagsire's back is larger and more noticeable than a female's.

Quagsire is both Water and Ground type; Quagsire's Ground-type negates the Water-type's usual weakness to Electric attacks, though the more powerful Swampert is usually favored for its wider movepool and better stats. The only real advantage over Swampert that Quagsire has is its Water Absorb ability. It is offensively strong against Fire-types with both Water and Ground-type attacks, but suffers from a double-weakness to Grass-type attacks—for example, Solarbeam (a Grass-type attack) will have a base damage of 480 against Quagsire instead of a base of 120.

Quagsire has above-average Attack and Defense and excellent Hit Points. It has very poor Speed. Hence, Quagsire is often given the Curse attack (which heightens Attack and Defense and lowers Speed) by breeding it with a Slowpoke or Torkoal. Quagsire also learns the Yawn attack, which puts foes to sleep after 1 turn with 100% accuracy.

It is advised to use a flying type to counter Quagsire's ground type attacks.

Quagsire played a major role in the episode "Once In A Blue Moon!" In the episode, a Quagsire steals Ash Ketchum's GS Ball. This is part of a Quagsire ritual which is performed when the moon turns blue. Wild Quagsire will collect round items from wherever they may find them. The ritual is held as Blue Moon Falls, and the Quagsire each use their Water Gun attacks to shoot their objects in the direction of the moon. This appears to be a competition to see which Quagsire can shoot its item the closest to the moon. Of course, the ritual is interrupted by Team Rocket, but they are eventually taken care of.

When the ritual ends, the round objects float down the river from where the ritual was held. Legend has it that the owner of the last item (Ash's GS Ball in this case) to appear down the river will be blessed with good luck.

Quagsire is also in the episode "Training Wrecks." In this episode, Ash, Brock, May, and Max, on their way to Mossdeep Island, land on Ganga Island. As they began to look around the island they wonder into a group of bodybuilders exercising. Later on Ash figures out that the bodybuilders are also Pokémon trainers. Ash is then challenged to a battle with a Quagsire and Walrein. Ash sends out Pikachu and Grovyle to battle. Ash defeats his opponent after realizing that Quagsire is impervious to electric attacks and Walrein's Ice Ball gets slower every time it was fired.

Quagsire also has a short appearance in the Pokémon movie "Pokémon Heroes". When Ash is running around the city looking for the girl, Latias, you see two Quagsire dive under a boat.

In the Pokémon Special manga, Quagsire is first seen as one of the Pokémon Crystal captured and sent to Professor Oak via the Portable Transfer System. She remarked that she found it on Route 32 and was "a tad stronger than I expected". 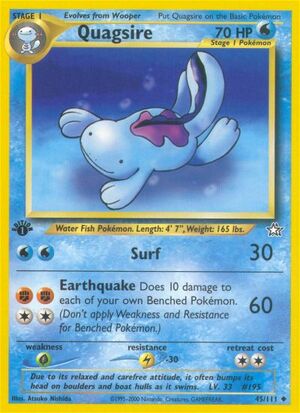 Quagsire appears in the following sets, either as a Fighting- or Water-type Stage 1 card: