The name Quilava may be a portmanteau of quill, a term for one of the sharp, hollow spines on the back of a porcupine, and lava, molten rock that erupts from within volcanos. The Japanese name Magmarashi is a portmanteau of "magma" and the Japanese arashi, for "storm". The name Quilava refers to the species as a whole and individual specimens in the games, anime, and manga.

In all aspects of the franchise, Quilava are shaped like long creatures with small forepaws and slightly longer hindpaws, a typical attribute of real-world animals that often stand on their hind legs (such as ferrets). Their tan fur is slightly darker than that of Cyndaquil, while the blue streak has been lowered to cover their eyes. As per the family line, Quilava sport short, coarse fire-proof fur and possess special vents on the head and lower back. Though they do not have a tail, the lower vents are positioned as to give the illusion of one.

In the Pokémon universe, Quilava are noted in the Pokédex to turn their backs toward their opponents in battle as a sign that they are about to use their flame-based abilities in battle, or to intimidate foes by demonstrating their power. Quilava are noted for their speed, and can nimbly evade attacks while scorching their enemies. They can also create gusts of superheated air. The non-flammable fur on a Quilava's back allows it to withstand any Fire-type attack, as well as burn enemies in close contact

One of the things consistent among most of the Pokémon games–spanning from Pokémon Red and Blue on the Nintendo Game Boy to the Nintendo DS games Pokémon Diamond and Pearl–is the choice of three different Pokémon, labelled the "Starter Pokémon", with which the player may begin the adventure. Players can choose a Water-type, a Fire-type, or a Grass-type Pokémon indigenous to the region. An exception to this rule is Pokémon Yellow (a remake of the original games that follows the story of the Pokémon anime), where players are given a Pikachu — an Electric-type mouse famous for being the mascot of the Pokémon franchise.

Quilava is the Stage-1 evolution of Cyndaquil, the Fire-type choice in Pokémon Gold, Silver and Crystal for the Nintendo Game Boy Color. Quilava can undergo evolution, a metamorphic change within a Pokémon caused by gaining experience in battle. Cyndaquil can evolve into their Quilava forms, the Stage 1 (middle) forms, at Level 14. Later, the Quilava can evolve into their Stage 2 (final) forms, Typhlosion, at Level 36.

There are seventeen different Pokémon types, a special attribute determining strengths and weaknesses of each species, offsetting each other in a complicated series of rock-paper-scissors-like relationships. Quilava are Fire-type Pokémon, so their fire-based attacks are particularly effective against Grass-, Bug-, Ice-, and Steel-type Pokémon, but Water-, Rock-, and Ground-type attacks are particularly effective against them. Attacks of the Fire-, Grass-, Bug-, Ice-, and Steel-types do little damage to Quilava, and Quilava do little damage to other Fire-types, as well as to Water-, Rock-, Ground- or Dragon-types. All other types have no particular advantage or disadvantage when facing Quilava.

Quilava can be obtained in the Game Boy Color games, by evolving a Cyndaquil obtained from Professor Elm. They can also be obtained in Pokémon Colosseum, where one can be snagged from Mystery Trainer Rosso in Phenac City, or in Pokémon Emerald, where one can again be evolved from a Cyndaquil, which can obtained after completing the Hoenn Dex from Professor Birch. Quilava can also be obtained from Pokémon XD: Gale of Darkness, in which a Cyndaquil can be won by completing the Mt. Battle challenge.

The Pokémon anime series and films are a meta-series of adventures separate from the canon that most of the Pokémon video games follow (with the exception of Pokémon Yellow, a game based on the anime storyline). The anime follows the quest of the main character, Ash Ketchum — an in-training Pokémon Master — as he and May (as well as several other companions) travel around the fictitious world of Pokémon along with their Pokémon partners.

In Episode 269, "Love, Pokémon Style", Ash had his first battle in the Johto Pokémon League, the Silver Conference, against Macey, a trainer using primarily fire-type Pokémon. Macey first uses her Slugma against Ash's Totodile, being badly damaged due to the type disadvantage. Macey then withdrew Slugma, and released her Electabuzz. Knowing that he was now at a disadvantage, Ash withdrew Totodile and released his Phanpy. Macey then changed her Electabuzz for her Slugma, which was knocked out by Phanpy's Earthquake attack. Macey then released her final Pokémon, Quilava, which quickly knocked out Phanpy with its Flame Wheel attack. Ash re-releases Totodile, causing Macey to change her Quilava for her Electabuzz, which knocked out Totodile with his Thunderpunch attack. Ash released his remaining Pokémon, Squirtle, which repeatedly dodges Electabuzz's Electric attacks, finally knocking it out with a Skull Bash attack. Macey releases her only remaining Pokémon, Quilava, and orders it to use its Flame Wheel attack to block Squirtle Water Gun. Squirtle defeats Macey's Quilava with its Hydro Pump attack, winning Ash the match and proceeding further in the Silver Conference.

Another Quilava featured in Episode 405, "Shocks and Bonds", in the Hoenn Pokémon League, and was used in the preliminary rounds, against Ash's Grovyle and Glalie in a double battle. It was owned by a trainer called Clark, nicknamed "The Conductor", because of his style of battling, who also used a Charizard in the battle. Grovyle and Glalie knocked out Clark's Quilava easily, but Charizard used a Steel Wing sneak attack, throwing Grovyle into a wall, and out of the battle. Glalie, in an attempt to stop Charizard from attacking it, created ice pillars on the field, bouncing off them with its head to pick up speed. Glalie knocked out the Charizard with a Headbutt, elevating Ash to the Victory competitions

Gold, a male protagonist of Pokémon Adventures (a manga series based on the Game Boy Color games), has a Cyndaquil, named Typhlo, that he received from Professor Elm. Typhlo evolved into a Quilava in Chapter 108, "VS. Quilava", during a workout session in the Goldenrod Day Care center, and then evolved again into a Typhlosion in Chapter 148, "Vs. Lugia! (Part 3)", whilst fighting alongside Silver's Croconaw and Crys's Bayleef against the Legendary Pokémon Lugia in the Whirl Islands. As the three trainers battled the large Pokémon, Lugia descended on the small island in an attempt to crush the heroes. However, Typlho, Croconaw, and Megapon protected their trainers by evolving into their Stage-2 forms. Typhlo was first used in battle, in Chapter 98, "VS. Totodile", against Silver, Gold's rival 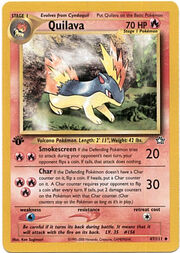 Most Quilava cards are typical, Stage-1 Pokémon cards, and are primarily used to play stronger Stage-2 Pokémon, like Charizard. Quilava — like Bayleef and Croconaw — has a number of appearances in the Pokémon Trading Card Game, appearing the in Neo Genesis (on two separate cards), Neo Destiny, Expedition, EX Sandstorm, and EX Unseen Forces sets