From Codex Gamicus
(Redirected from Quiver)
Jump to: navigation, search 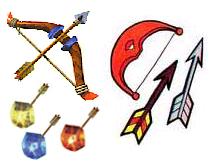 The Fairy Bow, Hero's Bow or just Bow is a weapon that appears in almost every game in the Zelda series. It usually works just like you'd expect a bow to work. In the first game in the series every arrow shot would cost Link one rupee. In all subsequent games, Link would carry a supply of arrows that would be depleted by shooting them, and replenished with power-ups found after defeating monsters. They'd also be found under rocks, bushes and tall grass as presents left by the Minish. The monster Gohma can only be defeated by repeated shots to the eye with arrows (not to be confused with the Queen Gohma, who can be defeated with the slingshot and Kokiri Sword.) If the player doesn't have any arrows, they simply cannot defeat a Gohma, and must exit the room (if possible) or otherwise commit suicide.

In all games that have the bow, there is a limit on the amount of arrows Link can hold at one time. It varies from game to game, and is usually 255 or 99. In The Legend of Zelda: The Ocarina of Time, the arrow limit could be increased by obtaining the Bigger Quiver as a reward for various minigames. The order that they're found in is irrelevant, as each quiver is always bigger than the last, much like the wallet upgrades. In The Legend of Zelda: The Wind Waker, certain Great Fairies would give Link a Bigger Quiver.

In some games, different kinds of magic arrows can be found. Once these arrows are found, they can give any normal arrow magical effects:

The final boss of The Legend of Zelda: Link's Awakening, Nightmare had many different phases, the final phase required Link to shoot several arrows into his eye (much like a Ghoma) to defeat him. If the player ran out of arrows before defeating him, there would have to (you guessed it) commit suicide.