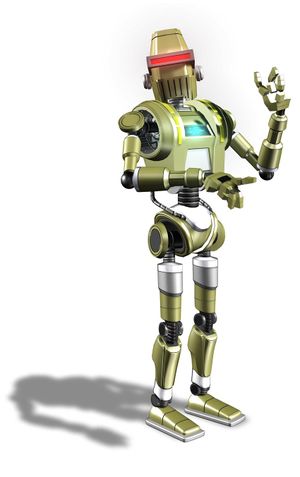 Robotic navigation unit aboard the Great Fox mothership of team Star Fox. ROB will frequently drop pickups in the level for assistance. ROB's name is a reference to the NES accessory R.O.B.

The 64 is derived from the console of his first appearance, the Nintendo 64. ROB's Japanese name, "NUS", stands for "Nintendo Ultra Sixty-four", the original name of the Nintendo 64 system, and is part of the serial number of all N64 components: the controller, for example, is NUS-005.

ROB has the ability to completely control the Great Fox, piloting it, providing information to the team, and aiding them with items and vehicles. After the first Great Fox is destroyed in Assault, he returns in Star Fox Command, piloting the new version of the Great Fox. On some paths in the game, ROB joins Star Wolf when no "hero" character is available. ROB is voiced by Daisuke Sakaguchi in the Japanese version of Star Fox 64 and Yusuke Numata in the Japanese version of Star Fox: Assault. He is voiced by Dex Manley in the English version of Assault.