Raichu is the evolve form of Pikachu. The name Raichu is a portmanteau of the Japanese words rai (雷, rai), meaning "thunder", and chūchū (チューチュー, chūchū), which is the Japanese onomatopoeia for a mouse's squeak. Raichu's name is also a pun on Raijū (雷獣, Raijū), a demon from Japanese mythology. The "Advanced Generation" drawing and sprite design of Raichu was created by Ken Sugimori's team for its 2003 release on the Game Boy Advance.

Raichu is parodied in Drawn Together as Ling-Ling's rich father Jun-Jee.

Raichu resembles a large, bipedal lagomorph, very similar to a jerboa. It has orange fur, a white underbelly, brown paws and yellow sacs on its cheeks. Its ears are large and pointed and partially curly and it has a whip-like tail that ends in a yellow lightning bolt shape. This end of the tail is flat in females and pointed in males. It also has no visible fingers.[3]

Like all Electric-type Pokémon, electricity features prominently in Raichu's life processes. Raichu absorbs electric charges from the environment as needed by either planting its tail in the ground or raising it in the air to gather electricity from the atmosphere. It then stores the accumulated charge in its cheek pouches, like its pre-evolved form Pikachu.

Raichu's ability to contain electric currents is impressive; it is common for its electrical attacks to have a power of 10,000 volts, although record potential differences of up to 100,000 volts have been recorded. Even when not battling, Raichu's body exudes a weak electric charge that makes it luminescent in darkness and can give a nasty shock to anyone who touches it carelessly. Raichu is stronger than Pikachu and they are extremely rare in the wild, due to the fact that Thunder Stones are needed for Pikachu to evolve into Raichu. Raichu can only be found in power plants.

Raichu's attitude is partially dependent on the amount of electricity that courses through its body. The more electric power it stores, the more energetic it becomes. Its muscles are stimulated, a phenomenon especially noticeable in its ears, which stand straight up. At extremely high doses of electricity, Raichu becomes unduly aggressive. As a safeguard against this, Raichu frequently calms itself down by discharging excess electricity using its tail as a ground. In the wild, this results in characteristic patches of scorched earth around a Raichu's nest

In the wild, Raichu can only be found in Pokémon Blue in the Power Plant and the Unknown Dungeon. Raichu can also be obtained by using a Thunderstone on Pikachu in all of the Pokémon role-playing games thus far except for Pokémon Yellow. There, the only available Pikachu is the starter Pokémon and it rejects the Thunderstone, following Ash Ketchum's Pikachu's suit of refusing to evolve to prove itself. (Any Pikachu acquired through trading can still be evolved, however). Also, there will not be a walking Raichu if you ever attempt to transfer it to other versions of the game, evolve it, and transfer it back.

Like most Electric-type Pokémon, Raichu has very good speed and special attack, but poor defenses. Unusually enough, Raichu also has a high attack stat, giving it the potential to use physical attacks quite effectively. Although Raichu learns mostly Electric-type attacks on its own, it can also learn the useful moves Reflect and Light Screen, which can support it and its teammates.

Interestingly, in Pokémon Red and Blue, there was a man on Cinnibar Island that one could trade their Raichu for an Electrode. Upon speaking to him again he would say "The Raichu you gave me went and evolved!". Raichu has no evolved form, and this line was fixed for Pokémon FireRed and LeafGreen.

In Pokémon Channel, Raichu can be found in Viridian Forest under certain time and weather conditions.

In Pokémon Ranger, Raichu can be found in the caves south of Wintown, in the Sekra Range and near the Fiore temple. It has level three electric power, and is capable of fully recharging the Styler.

Raichu is used by Volkner, the final gym leader in Pokémon Diamond and Pearl. It is Level 46, making it his lowest leveled Pokémon.

Raichu has made a fair number of guest appearances, usually as a Pokémon belonging to the trainer met in that episode. In such appearances, Raichu usually cooperates with Ash's Pikachu and Team Rocket usually abducts both. It appears in a Pikachu short called, "Pikachu's Vacation" where all of Ash, Brock, and Misty's Pokémon go to a Pokémon day care. They run into a Snubbull, Marill, Cubone and a Raichu, who bully them for a while, but later become friends.[2]

Raichu's most important appearance was as one of the Pokémon used by Lt. Surge, the Gym Leader of Vermilion City. Ash's Pikachu was first beaten by Lt. Surge's Raichu, and it was given the option to evolve so that it could become powerful enough to stand a chance. However, Pikachu refused to evolve, intent on beating Raichu in its own way. Raichu's evolved status proved to be its undoing; Lt. Surge had evolved it too quickly and it had never learned Agility and speed-related attacks. Pikachu used those attacks to run rings around Raichu, which was rendered powerless when it discharged all its electricity.[3]

Other anime appearances include being of great importance in "Lights Camera Quacktion", "Stage Fight", and "Mild n' Wooly". Raichu also made an appearance in Raikou - The Legend of Thunder, an episode of the Pokémon Chronicles spinoff series. In it, Team Rocket members Attila and Hun use a machine to attract Electric Pokémon, in an attempt to capture the legendary Pokémon, Raikou. When the machine begins to hurt the Electric Pokémon, a Raichu attempts to strike back, but it is thwarted by the machine's ability to absorb and reflect electrical attacks.

Lt. Surge has a Raichu in Pokémon Special. Satoshi had a Pikachu that chose to evolve into a Raichu to help him defeat the Elite Four in Pokémon Zensho. A Raichu is a character in Pokémon PiPiPi Adventure. 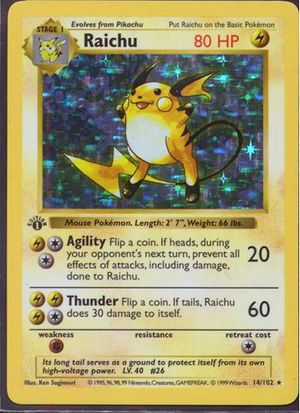 Raichu in Base set

Raichu is one of the most influential lightning-type Pokémon in the card game, for in addition to being the evolution to Pikachu, the effective mascot of Pokémon, it was a Stage 1 Lightning card in a generation where there were no stage 2 lightning-type Pokémon (until Ampharos came in the second generation). That is why there are fifteen cards with its name on it as of now, and they are in the following sets: Base Set, Fossil, Team Rocket (as Dark Raichu), Gym Heroes (as Lt.Surge's Raichu), Gym Challenge (also as Lt.Surge's Raichu), Neo Revelation, Neo Destiny (Basic, as Shining Raichu), Pokémon *VS (Basic, as Jasmine's Raichu), Pokémon *VS (Basic, as Lt. Surge's Raichu), Expedition, Skyridge, EX Sandstorm (as Raichu EX), EX Team Magma vs. Team Aqua, EX: Firered & Leafgreen, EX: Emerald(as Raichu EX), EX Holon Phantoms, and EX Holon Phantoms (Steel-type delta species).[4] Shining Raichu's Thundersquall attack requires two Lightning energy and two Water energy. Notably, Dark Raichu was a "secret" card; it was not listed in official catalogues, and was numbered 83rd from a set of 82.