Raikou is a Legendary Pokémon, one of the three "Legendary Beasts" that are featured in Pokémon Gold, Silver' and Crystal.

Raikou is of the three Legendary Beasts of the Johto region, and is the most feline in appearance of the three. According to legend, the Legendary Beasts were reincarnated by Ho-Oh from the spirits of three Pokémon which died in the fire that gave Burnt Tower its name. Another myth maintains that Raikou descended to earth together with a lightning bolt. Each Beast personifies a force of nature - Raikou, in particular, embodies the speed of thunder.

The three "Legendary Beasts" are common in one sense, having a structure similar to, or compromised of a cloud on their backside. Raikou's seems to be a storm cloud, reflecting its typing of electric.

Like many Electric-type Pokémon, Raikou stores tremendous energy inside its body. This grants it extraordinary vitality, allowing it to run continuously across the land while shooting off electricity from the rain cloud that is on its back. Raikou's roar is aptly described as "thunderous": it is loud enough to create shock waves and shake the ground as if actual thunder had struck.

Raikou appears to be more of a Saber-toothed cat. The "cloud" on its back is almost exactly the same as the one on Suicune.

Raikou was first available in Pokémon Gold, Silver and Crystal. The player must first awaken it in the Ecruteak City Burned Tower, after which it will wander all over Johto, apart from caves and water routes.

After it is encountered in the wild for the first time, the player can track it in the Pokédex. It will follow a set pattern, changing Routes whenever the player enters a new area and moving to a random location when the player uses Fly. Whenever encountered, Raikou will quickly flee, but it will retain any damage sustained, until finally its Hit Points are low enough to be captured. If poisoned its HP will keep lowering as it moves and it will faint. It can be caught at Lv. 40.

In Pokémon Fire Red and Leaf Green, the player must have chosen Squirtle as his or her starter Pokémon.  Raikou will then start wandering around Kanto in a similar fashion after the Elite Four are defeated for the first time, Professor Oak has given you the National Pokedex (talk to him after capturing 60 pokemon and beating the Elite Four), and the player has repaired the network machine on One Island by giving the Ruby and Sapphire to Celio. Raikou can be encountered while surfing, but cannot be encountered while in a cave. It, like Entei, has Roar to deal with moves such as Mean Look and Spider Web to escape from wild battles. It can be caught at Lv. 50.

In Colosseum, Raikou is a Shadow Pokémon. It can be Snagged from Cipher Admin Ein at the Shadow Pokémon Laboratory. Bear in mind that there is only one PC in the lab, but if one fails at snagging Raikou, Ein will reappear with it at the Realgam Tower and the Deep Colosseum. Otherwise, he will have a different Pokémon.

Raikou also appears as both a boss and playable character in Pokémon Mystery Dungeon.

Raikou appears as a boss character in Pokémon Ranger in which it can summon lightning to strike from the sky, in order to stop the player from capturing it.

Raikou also makes an appearance in Super Smash Bros. Melee, as one of the legendary Pokémon that can emerge from the Poké Ball item. Once released, it will stand in place, and use the move Spark to envelope itself with electricity. It will only hit if opponents are on the ground within the spark but each hit will do 20% damage. Raikou also appears as a trophy.

An interesting note on Raikou's coloring: In the 3rd-generation games, Raikou's noseplate is white, but in the 3-D games like Colosseum and XD, it is blue. The same is true for its tail.

Unlike the other two Legendary Beasts, Entei and Suicune, Raikou does not appear in one of the movies. Instead, it is featured in a special episode called Raikou - The Legend of Thunder that now forms the first three episodes of Pokémon Chronicles. In the special, two Team Rocket agents named Attila and Hun scheme to capture Raikou with a device that reflects and deflects energy blasts. Three New Bark Town trainers risk their own lives to try and save Raikou. It is thought by the trainers that Raikou attempts to guard other electric Pokemon from danger whenever possible.

Raikou has also made a silhouette cameo in episode #182 (Houndoom's Special Delivery). Both Houndoom and Misty's Togepi saw it hiding behind a bush before it took off.

Three of them happen to appear in "What's with Wattson" and "Manectric Charge". However, they turned out to be robots created by Wattson to surprise the trainers. This means Ash and Co. have never seen it, though Tracey saw it on at least one occasion. 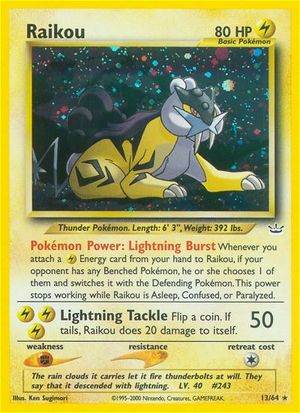 In the Pokémon Trading Card Game Raikou has appeared on many cards, all as lightning-type Basic Pokémon in all the expansions listed below: