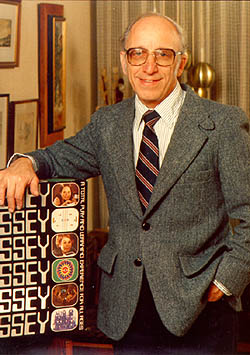 Ralph Baer is generally credited as "the father of video games".

When Baer was eleven years old, he was expelled from school in Germany because of his Jewish ancestry and had to go to an all-Jewish school. His father worked in a shoe factory in Pirmasens at the time. Two months before Kristallnacht, he and his family escaped from Germany.[1][2][3][4][5][6] [7] [8] [9] In America, he was self-taught and worked in a factory for a weekly wage of twelve dollars. He graduated from the National Radio Institute as a radio service technician in 1940. In 1943 he was drafted to fight in World War II, assigned to Military intelligence at the US Army headquarters in London.

He patented a game similar to Pong, partnered with Magnavox to create the first console, and displayed it at a trade show, where it inspired Nolan Bushnell of Atari to create Pong. They later sued him him and won. Bushnell says today that he was not impressed by Baer's games, but the video game technology.

He eventually went on to invent Simon, that electronic toy where you try and memorize a series of button presses that get progressively harder.

There is some controversy on the title of "father of video games". While Baer has the patent, some dispute that William Higinbotham, who created a pong-like game that was played on the oscilloscope called Tennis for Two, was the first true inventor of the video game.