Rampage is a 1986 Action video game by Bally Manufacturing and Midway, originally for Arcade platforms, but later ported to various home consoles. Rampage is the first game in the series, being followed by Rampage: World Tour in 1997.

Three human test subjects from the ScumLabs research facility have been transformed into 50 foot monsters, and have now escaped and are on a rampage. George, a middle aged man transformed into a monstrous gorilla, Lizzie, a young woman transformed into a reptilian monster, and Ralph, a giant werewolf are making their way through every city in the United States and reducing them to rubble, with the military standing little to no chance at stopping them.

Rampage can be played with 1 to 3 players, with the player(s) controlling the 50 foot monsters George the gorilla, Lizzie the reptilian monster, and Ralph the werewolf. The player(s) goal is to destroy all the buildings in each level, which is done by climbing up them and destroying them piece by piece until they collapse. Military soldiers shoot at the player through building windows, leaving the player to avoid their bullets or destroy the section of the building they're in. Tanks also attack the player, and demolitions soldiers place bombs near buildings to destroy them, robbing the player of points, unless the player eats them. Bonus points can be earned by grabbing and rescuing civilians seen flailing and screaming in building windows, with George being able to grab women, Lizzie grabbing men, and Ralph grabbing businessmen. When a player's life bar is completely drained, they will transform back into their human forms, now naked, and slowly walk off screen covering themselves with their hands. If the player has an extra life, then their monster character will return to the level holding onto a ScumLabs blimp. 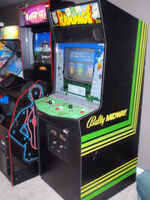 The Rampage arcade cabinet featured 3 sets of controls, for single player gameplay, as well as 2 or 3 player co-op.

The NES port of Rampage featured only George and Lizzie, as to comply with the NES's two player compability.