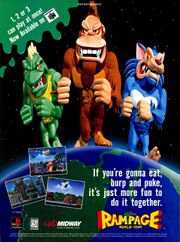 ScumLabs, a top secret branch of government research facilities, has had an outbreak at one of their facilities. Three escaped human test subjects, who have now been transformed into hulking 50 foot monsters, have escaped the facility and are on a rampage throughout the united states, destroying entire cities as they find and destroy every ScumLabs facility they can.

Each level is represented by a day, with a total of 130 levels/days till the game is completed. Each level pits the player(s) in a new city, where they must destroy every single building to advance to the next level. The player can destroy buildings by climbing onto the side of them and punching them, and by jumping on the buildings from the roof to bring down the buildings overall health and it collapses. Building's strength varies depending on the size, with small stores and outlet buildings being destroyed easily, but skyscrapers and other high rise buildings require much more damage. The player can also destroy other objects such as cars, helicopters, and even eat people for bonus points.